After plenty of speculation about missing the Super Bowl to witness the birth of his first child, Richard Sherman and girlfriend Ashley Moss welcome a healthy baby boy this morning.

My son sure does know how to make an entrance! 2/5/15… Is it a coincidence or is he just that clever?! Either way I'm ecstatic

For those who do not get the joke, the Seahawks cornerback wears the number 25 and his son was just born on 2/5/15.

And according to Sports Illustrated writer Peter King, Sherman’s son is named Rayden.

Congrats to Richard Sherman and his girlfriend on the birth of son Rayden this morning.

After this early morning announcement, tons of friends and former teammates have reached out through twitter to congratulate the shutdown corner.

Man shot out my brother from another had his son this morning. A healthy handsome lol fella can't wait to meet him. #baby #shutdown 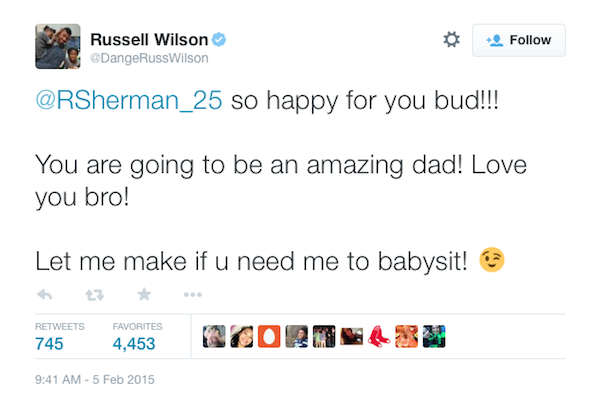