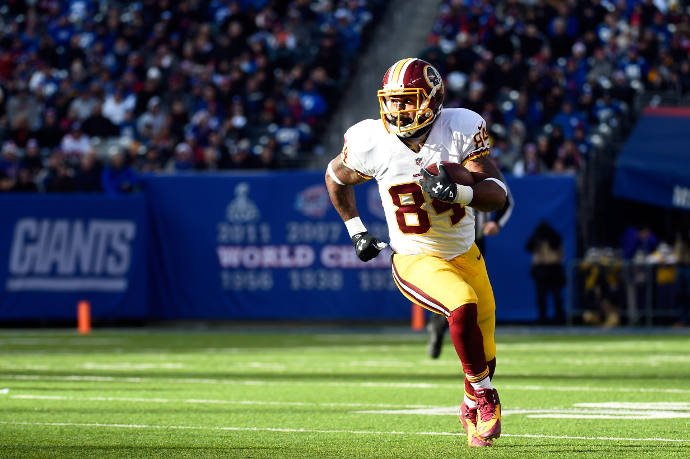 during their game at MetLife Stadium on December 14, 2014 in East Rutherford, New Jersey.

The Washington Redskins are now strangers to injuries on offense and defense, and their preseason opener did not treat them kindly. Starting tight end Niles Paul dislocated and fractured his ankle, and is now out for the whole season.

After attempting to block a run, his left leg slid under and then was rolled over by Browns linebacker Craig Robertson in a gruesome scene. After the game, Redskins coach, Jay Gruden reported the end of the linebacker’s season, saying that it’s, “a huge loss for us. He’s a great player & and a great leader,” Gruden said.

Last season, Paul had a stellar year with 39 catches for 507 yards, and he showed promise for this season on Tuesday’s practice, where he had a 55-yard touchdown reception, wowing both teammates and management. In his fifth season out of Nebraska, Paul recently gained 10 pounds of muscle with improved blocking ability, moving him from second string to first on the depth chart.

Now the Redskins are desperately looking for replacement options at the tight end position, as all of their options are in some way hampered by injuries. Last year’s starter, Jordan Reed, is currently out with a hamstring injury, and Logan Paulsen the third string right end, is to undergo a season ending toe-surgery. This means that the Redskins will have to look somewhere else for their missing piece, and it may have to come from the offense.

Currently there are rumors circulating that they will be looking at former star Chris Cooley, but Gruden has reported that he wants to see what the players on his team can do before turning their hopes to the free agency.

Good call coach, just make sure you don’t look there too late.