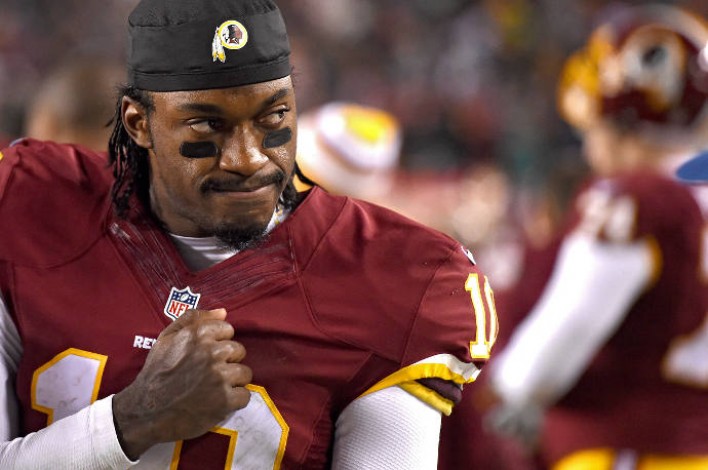 Caption:LANDOVER, MD - DECEMBER 20: Quarterback Robert Griffin III #10 of the Washington Redskins acknowledges the crowd as time expires in the fourth quarter against the Philadelphia Eagles at FedExField on December 20, 2014 in Landover, Maryland. The Washington Redskins won, 27-24. (Photo by Patrick Smith/Getty Images)

He may say he’s the best, but even the best can get injured. Robert Griffin III, Washington Redskins quarterback, recently suffered a concussion on Thursday’s practice games against the Detroit Lions as he ran to retrieve a fumble.

Redskins coach, Jay Gruden, is currently unsure as to if his QB would be cleared to play any time soon. Before he will be able to be played, however, RGIII will have to go through the NFL’s concussion protocol – now required due to the increasing volume of head injuries. At a press conference, Gruden said, “We’ll have to wait, go through the whole process, see how he recovers, see how fast he recovers.”

And to make matters worse, it isn’t only a concussion that RGIII is worried about, but also a shoulder stinger that he received after Corey Wilson, Lions defensive end, tackled Griffin and landed on his shoulder. He gave management a scare, as he laid on the field for a few minutes before being helped up and giving a thumbs up sign.

The question is, why was Griffin still even playing in the second quarter of a game that doesn’t really matter? “We weren’t doing that well on offense. I wanted to try to get something going on offense,” Gruden said. “A lot of quarterbacks play into the second quarter in a preseason game. Football is a tough sport.”

And not doing well may perhaps be an understatement as RGIII was sacked three times while receiving a number of hits through four series. He was also only 2 of 5 passing for a grand total of only 8 yards.

For now, the Redskins will substitute Colt McCoy in Griffin’s place, and that may give Gruden the offensive spark he is looking for. McCoy has had a solid showing throwing 80 yards anf a touchdown on 5 of 6 passes in a Redskins 21-17 win.