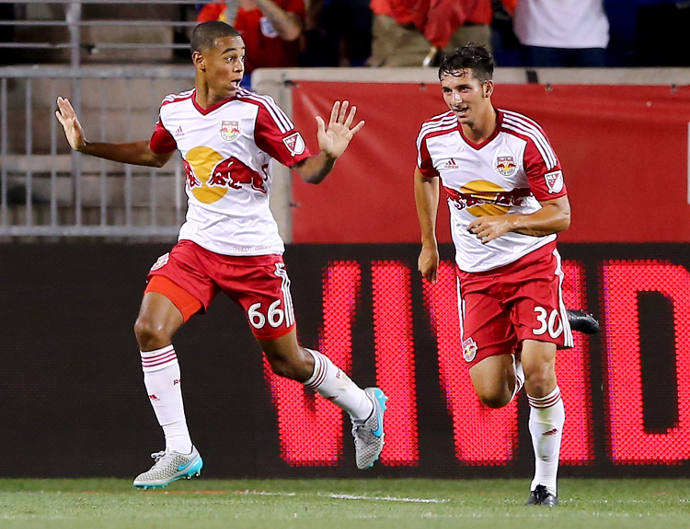 The New York Red Bulls must have taken some of Jordan’s Secret Stuff, as they somehow pulled out a 4-2 win against the English soccer champs, Chelsea FC, during the International Champions Cup Wednesday.

What’s even more surprising is that a 16-year old striker, Tyler Adams, was a main factor in the soccer giant’s defeat, giving a timely backpass to Castellanos and later heading in a goal, putting the Red Bulls in the lead at the 68th minute.  The American team would go on to score four goals, two courtesy of Sean Davis, in the second half, stunning Chelsea coach, José Mourinho, and essentially any other viewer watching – even Red Bull fans.

This doesn’t look good for Chelsea’s new goalie, however, as the game was Asmir Begovic’s first appearance with the team. It also may be his last. But that wouldn’t be a fair assessment of his play, being Mourinho made eight changes at half time and Chelsea controlled the game’s pace for 50 minutes.

When asked about this loss, he said that, “[The Red Bulls] were sharp, quick and had high motivation. They were very happy to play against us and they gave us a better match then we thought. I am the manager of the best team of England, we have top players, there are no fragilities. We have done 11 sessions in six days. We trust these players. We play this team 10 times, we win nine – but the second half was a disaster. If we had won 10-0 that wouldn’t have been any good. We needed a test and we received one.”

The Red Bull’s coach, Jesse Marsch, conversely spoke with a suppressed joy and of praise of their young striker. “It was an incredible result for us as a club,” said Marsch. “Tyler is finishing high school and is with the Under-17 national team. He is very alert and not afraid. He has a very big future.” It is honestly ridiculous that such a young player is going toe to toe with the sport’s elites.

Chelsea plays PSG on Saturday night, and hopefully they can bounce back.

But the question on everybody’s mind is, will the Red Bulls be able to do this feat again against Portugal’s Benefica on Sunday?