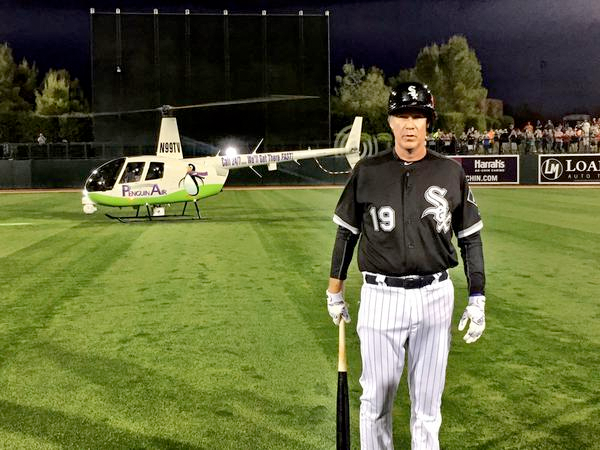 Comedian Will Ferrell has always been a big sports fan. Whether it’s his roles in movies like Talladega Nights, Blades of Glory, and Semi-Pro or his appearances on Sportscenter, Ferrell seems to always bring out his passion for sports. On Thursday he took that to a whole new level by playing in five MLB Spring Training games in Arizona for ten teams, all while playing a different position for each club.

Ferrell’s day-long odyssey began in Mesa, AZ as the Oakland A’s took on the Seattle Mariners. Ferrell started at shortstop for Oakland. After a “trade” to Seattle, he shifted over to second base.

From there it was onto Tempe for the Los Angeles Angels to use Will’s services against the Chicago Cubs. Ferrell was brought on to replace 2014 American League MVP Mike Trout at center field. Midway through the game Ferrell was once again “traded,” this time for a washing machine to the Cubs. After some hilarious antics as third base coach, Ferrell took an at bat for Chicago. Ryan Mattheus struck Ferrell out in three pitches in the comedian’s first batting appearance of the day.

Ferrell continued his day as an Arizona Diamondback after a “trade” for some ballpark fare, where he took the role of an outfielder. The opponent Cincinnati Reds decided to take advantage of Ferrell’s “status” on the waiver wire and brought him along as the game progressed– fake beard and all.

Later on in the evening, Ferrell arrived in style by landing in a helicopter in center field for the Chicago White Sox-San Francisco Giants game. As the White Sox designated hiter, Ferrell once again struck out. He was then “traded” once more to the Giants, where he took in an inning behind the plate as a catcher. The turnaround from DH to catcher was a quick one, as he had only five minutes to throw on some catcher’s gear after his at bat.

Ferrell ended his day in Peoria as the San Diego Padres faced the Los Angeles Dodgers. As a Padre, Ferrell played in the outfield and warmed up with Buddy the Elf. He was then traded for the final time to the Dodgers to become a pitcher. He threw one pitch and recorded an out on a bunt attempt.

ESPN Stats & Info tweeted Ferrell’s final scoreline on the day, which wasn’t too shabby for a non-athlete playing in the big leagues:

Will Ferrell: career spring ERA of 0.00, career fielding pct of 1.000 after retiring only batter he faced for Dodgers #FerrellTakesTheField

The busy day was all for a good cause, as it helped raise funds and promote the Cancer for College fund, a charity Will Ferrell helps run to provide scholarships to college aged cancer survivors, and Stand Up To Cancer in conjunction with Major League Baseball.