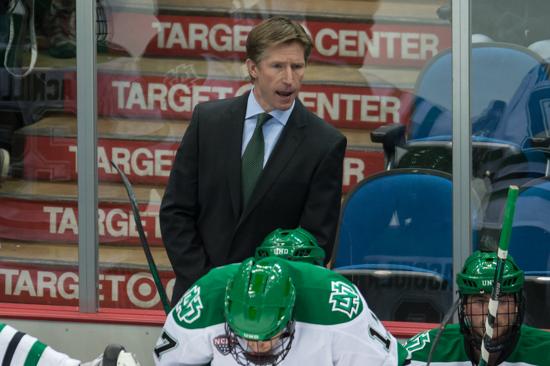 The Philadelphia Flyers ended their coaching search on Monday by hiring North Dakota head coach Dave Hakstol for the position. Hakstol will become the franchise’s 19th coach and will be put in charge of helping the Flyers regain form in a competitive Metropolitan Division.

Hakstol had a very successful college coaching career, racking up 289 wins in his 11 seasons at The University of North Dakota. North Dakota made the NCAA Men’s Hockey Tournament every year in his tenure and made it to seven Frozen Fours. His final season at the helm in North Dakota saw the team reach the national semifinals and go 29-10-13.

Harkstol will replace Craig Berube, who was fired after two seasons. The Flyers missed out on the playoffs this season after making it in 2013. Philadelphia has also yet to win a playoff series since they knocked out the rival Pittsburgh Penguins in 2012.

Although college-to-pro coaching swaps occur often in other sports, especially in football and basketball, it’s very rare to happen in hockey. The last NCAA head coach to move from the collegiate game to the NHL was the legendary Herb Brooks in the 1980s. Even still, Brooks had prior NHL experience when he took on that job. Hakstol has yet to coach at the NHL level. If he find success with the Flyers, however, it could start a new trend of college coaches becoming a part of the NHL game.