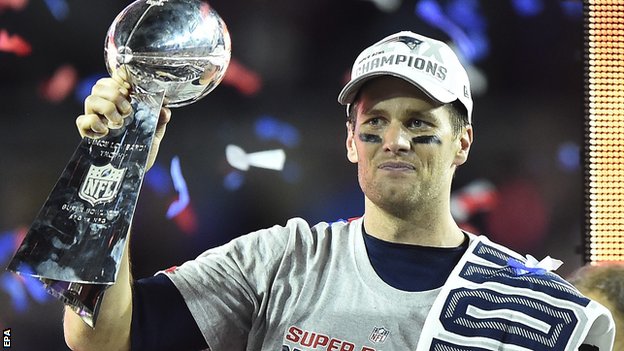 In what will go down as one of the most exciting finishes in Super Bowl history, the New England Patriots came away as the NFL Champions by defeating the Seattle Seahawks 28-24 in Super Bowl XLVI. It’s the franchise’s 4th Super Bowl, all of which under coach Bill Belichick and quarterback Tom Brady. Brady was named Super Bowl MVP for the third time in his career for his performance.

The game started off on a very quick pace due to the gameplan for both teams. New England mainly relied on short throws while Seattle was committed to running the ball. As a result, the first quarter ended in about a half hour. However, there was no score after fifteen minutes, as the only long drive ended when Seahawks defender Jeremy Lane picked off a Brady pass in the end zone. Lane was injured on the return and was unable to come back, meaning Seattle was very thin at secondary for the rest of the game.

The scoring kicked off six minutes into the 2nd Quarter as the Patriots fired first with a touchdown by Brandon LaFell. Later in the quarter Seattle responded by capping off a 70 yard drive with a Marshawn Lynch touchdown run. The Patriots quickly responded with an 80 yard drive highlighted by a Rob Gronkowski touchdown catch to put them up 14-7 with under a minute left in the half. However, the Seahawks made even quicker work on their next drive, going 80 yards to tie the game up in a span of 29 seconds. For the third time in Super Bowl history, the game was tied at halftime.

The third quarter looked like the Seahawks were going to run away with the game, applying their late half momentum to the next frame. Their offense was able to put 10 points up on the board while the defense came up big with an interception by Bobby Wagner. Wide Receiver Chris Matthews, a relative unknown before the game, was putting on the performance of his life for the Seahawks and shined throughout the 3rd quarter. Matthews finished the game with 109 yards and a touchdown. With Tom Brady looking uncharacteristically sluggish, the game looked like it was Seattle’s for the taking.

However, the Patriots, like they have so many times before, marched into the 4th quarter on the comeback trail. Brady led the Patriots on two straight touchdown drives to put New England back on top 28-24 with just over two minutes to go in the game. It would be tied for the largest deficit a team has come back from in the 4th quarter of a Super Bowl at 10. Seattle had one last chance to get back in the game like they had two weeks earlier against the Green Bay Packers. With a spectacular circus catch by Jermaine Kearse at the 5 yard line, Seattle was back in business and New England was beginning to relive the nightmare of David Tyree‘s catch at Super Bowl XLII, which was also played at University of Phoenix Stadium.

But in perhaps the most baffling playcall in football history, Pete Carrol and the Seahawks coaching staff called for a pass play at the one yard line on 2nd and goal. Instead of utilizing Lynch, one of the most deadly red zone running backs in the game, they made quarterback Russel Wilson throw a slant rount into coverage in an attempt to kill the clock. The result was fatal to Seattle’s chances, as Malcolm Butler intercepted the throw in the end zone and sealed the deal for the Patriots. Instead of grabbing the very late lead and putting the game almost out of reach, the Seahawks were now on the losing side of history. After a scuffle between the Seahawks defenders and some of the Patriots offensive players, the game was over and the Patriots came away with the 28-24 victory.

Brady had a record setting night at the Super Bowl, with his 37 completions setting a new Super Bowl record. He also passed Joe Montana for the most career Super Bowl touchdown passes thrown with 11. He ended the night with 328 yards and 4 touchdowns, giving him the MVP honors.