Patriot's Garoppolo Doesn't Prove He Can Carry Team In 22-11 Loss To Packers - uSports.org 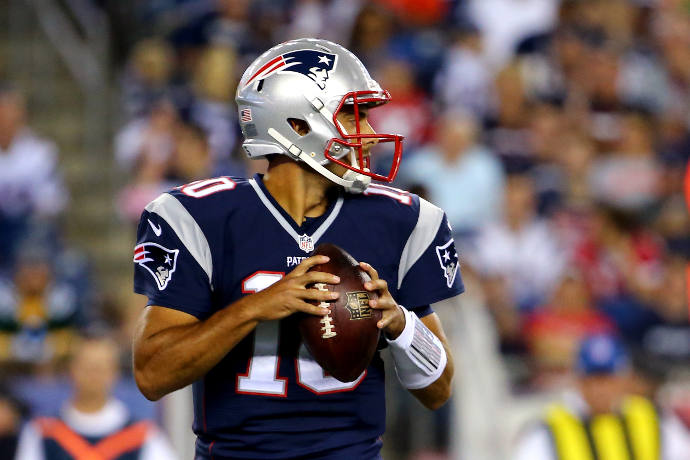 during a preseason game at Gillette Stadium on August 13, 2015 in Foxboro, Massachusetts.

Let’s get it out of the way now, Jimmy Garoppolo isn’t Brady, but everyone already knew that. What everyone doesn’t know, is that it will take more than one preseason game to see if he is good enough to lead the Patriots while Brady sits out.

First of all, his offensive line was a gaggle of randoms like Josh Bryce and Chris Harper, and he still managed to do okay. Not good, not bad, but okay, which is to say the least as the New England Patriots went down to the Green Bay Packers 22-11.

During the game, Garoppolo was sacked a number times due to his inexperience holding the ball in the pocket and was pressured to throw an interception after a bad pass on a long drive. Statistically speaking, he was 20 of 30 passes for a measly 159 years for a 5.3 yard gain per attempt, and the Pats only scored on two of his nine drives.

In a statement to NFL.com, Garropolo said,

“I’ve got a long way to go obviously. Eleven points is not by any means good enough. There’s room for improvement.” n reality, there should be room for improvement for a second-year quarterback who threw 27 passes as a rookie in 2014. And with three games left on the preseason schedule, there’s plenty of time for that improvement to happen.”

However, there glimpses of greatness in Garoppolo, as early in the game, he stood tall in the pocket and made correct reads on coverages. It also should be of note that the 23 Patriots starters did not suit up to play this game. Starting linemen Ryan Wendell, Bryan Stork and Nate Solder, tight end Rob Gronkowski, receivers Julian Edelman and Brandon LaFell and running back LeGarrette Blount did not see an ounce of play, and that could have made a difference in the new QB’s play.

Compounding the problem, the Packers defense were in no shortage of blitzes and stunts against this tattered offense.

Now, fans will have to wait for Garoppolo to play, as Brady returns after games aginst the Steelers, Bills, Jaguars and Cowboys. It’s not hard to imagine how Garoppolo must feel, as a year ago, two of the said teams were playoff contenders.