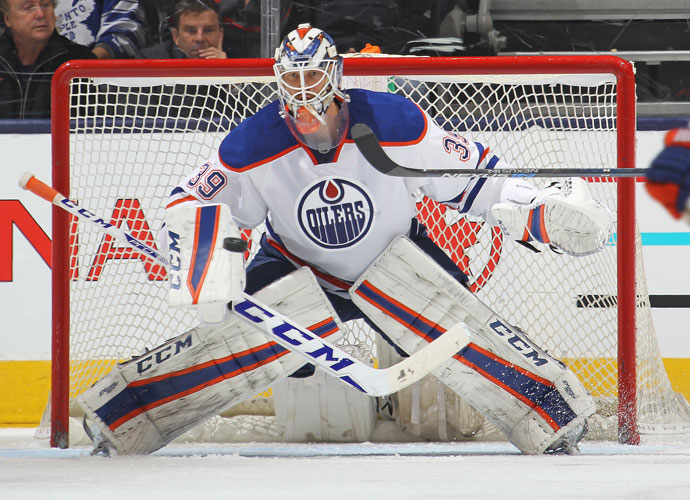 TORONTO, ON - NOVEMBER 30: Anders Nilsson #39 of the Edmonton Oilers watches an incoming shot against the Toronto Maple Leafs during an NHL game at Air Canada Centre on November 30, 2015 in Toronto, Ontario, Canada. The Maple Leafs defeated the Oilers 3-0. (Photo by Claus Andersen/Getty Images)

In a year full of injuries, home cooking did the Edmonton Oilers some good. In their first game at Rexall Place following 1-3-1 road trip, they edged the Boston Bruins 3-2 in a shootout.

“We weren’t at all pleased with how our road trip ended in Toronto,” Edmonton coach Todd McLellan said. “To come back and play and engage in a game against a big, physical team was something we needed.”

Edmonton was also buoyed by the strong play of goaltender Anders Nilsson. Despite coming into the season behind Cam Talbot on the depth chart, the Swede has grabbed hold of his chances in Alberta. He made 38 saves through regulation and overtime and denied all three Bruins in the shootout.

The game carried added significance due to the fact that Peter Chiarelli, former Bruins general manager, is now calling the shots in Edmonton. Not only did he issue contracts to many of the Bruins’ mainstays, but he also helped bring a Stanley Cup to Boston. While turning around the Oilers is sure to be a challenge, his old collegues are sure that Chiarelli is up to the task.

“I know it’s been a while for this team to turn the corner but he wasn’t able to do it in his first year (in Boston),” Bruins head coach Claude Julien told Joanne Ireland of the Edmonton Journal. “I’m sure with time he’ll make some good decisions. He’s a pretty smart individual.”

“I think you have to give Peter a lot of credit [for the Bruins’ Stanley Cup]. He was there a year before I even got there and what he inherited as far as a team was one that wasn’t making the playoffs. Within five years or so he turned it into a Stanley Cup champion,” Julien continued. How could you not give credit to a guy who does that with a team? He assembled players. He brought the right players in and we were able, as a group, to work into making it a championship team. A lot of credit goes to him for that.

Photo: Anders Nilsson #39 of the Edmonton Oilers watches an incoming shot against the Toronto Maple Leafs during an NHL game at Air Canada Centre on November 30, 2015 in Toronto, Ontario, Canada. The Maple Leafs defeated the Oilers 3-0. (Photo by Claus Andersen/Getty Images)