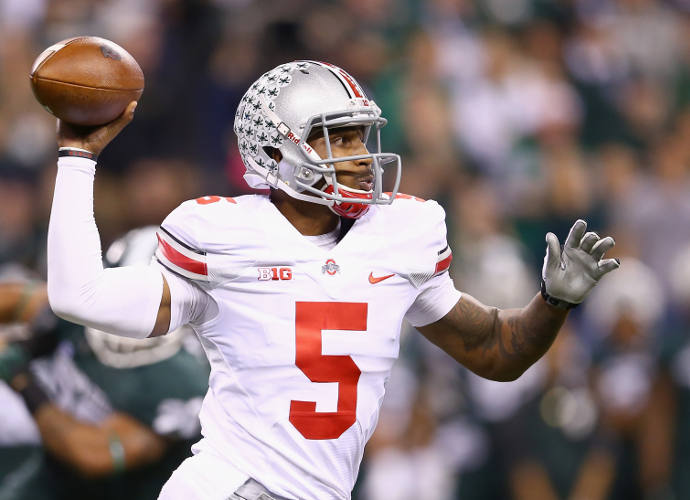 Braxton Miller was a good quarterback for Ohio State, and after a change of heart, will return to OSU as a H-Back,  hybrid wide receiver position that lines up like a tight end, but set further away from the line of scrimmage.

“Miller’s fallback plan has become a reality, he plans to start the 2015 season playing H-Back — a hybrid receiver position — for the Buckeyes. Miller hasn’t completely closed the door on playing quarterback, as he estimates that he’ll spend 80% of the time during training camp at receiver and 20% with the quarterbacks. But Miller said with more than two months until he’ll be completely healthy at quarterback, he’s approaching this season as primarily a wide receiver.”

“I want to be the best at what I do,” Miller said.

And the 6’2’’ 215 pound Miller is pretty good at being a playmaker, which is illustrated by his stats at QB. During his tenure at quarterback, he had a 59.3 completion percentage on a total 5,292 total passing yards, 52 of which, were touchdown passes. However, he did throw 17 interceptions. While his completion rate is just shy of having one of the top 50 completion rates out of all college QBs in the country, he is a pretty solid thrower.

Miller has wanted to be a receiver for nearly three months, but  because of injuries, he asked his coach to keep the decision to switch under the radar until he was able to heal. Even his team didn’t know about the switch – only less than five players had that information, Miller said.

With Miller out of quarterback contention, the starting position with now be fought by J.T. Barrett and Cardale Jones.