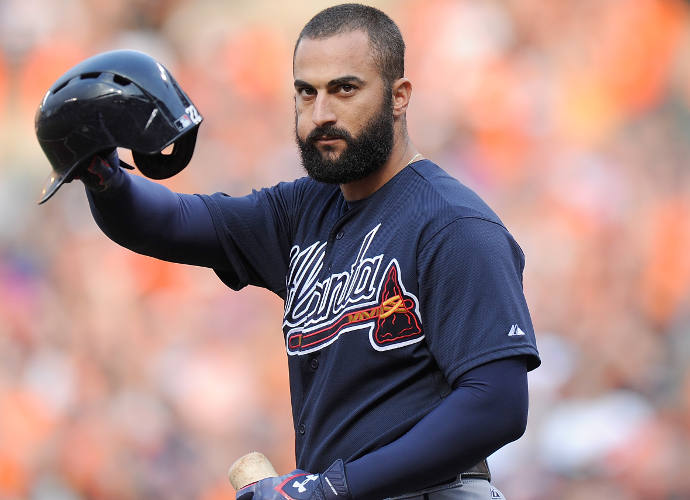 against the at Oriole Park at Camden Yards on July 27, 2015 in Baltimore, Maryland.

When former Baltimore Orioles right fielder Nick Markakis decided to leave his longtime team and sign a four-year, $44 million deal with the Braves, he began to fully understand how players were part-time businessmen. While he did change teams, the city he rallied for did not forget who they cheered for during his past nine seasons of his Major League Career.

Monday was the first time since Markakis left that he played against the Orioles at Camden Yards. And while his former teammates showed him they did not necessarily need him to win, claiming a 2-1 11th inning victory, Markakis will never forget the reception that the Baltimore fans gave him (a wild, loud standing ovation) before he hit an opposite-field double.  He was also honored with a video tribute during the bottom of the second inning.

When asked about how he felt about the ovation and his transition to the Braves, he said:

“These fans have been great to me throughout my career and tonight just shows what type of fans they are and how loyal they are. It was pretty cool. Anything can happen, it’s a business. I understand the business aspect better right now. It’s a tough thing to go through, especially when you’re attached to a baseball team and an organization for so long. It was a little hard at first. It took a little time to get over it. I’m here in Atlanta now and I’m happy where I am. We’ve got a good  group of guys that we work with every day.”

The Orioles management would have kept Markakis, but they were unable to match Atlanta’s offer due to concerns about his herniated disk that was repaired during a neck surgery in December. He has occasionally frustrated by the physical limitations put on him due to it, but he plans to keep his family residence in Baltimore, where he attended both high school and college.