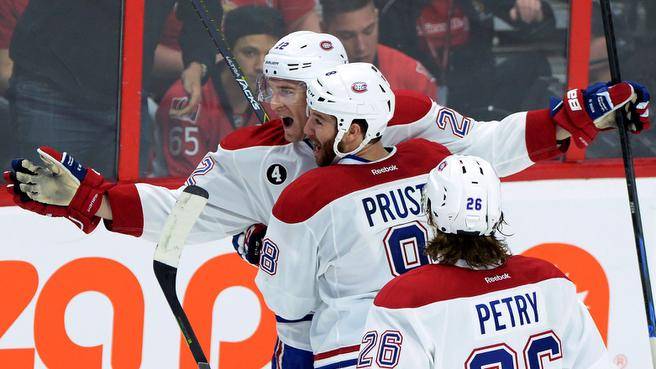 The first weekend of the NHL Stanley Cup Playoffs are in the books, but there’s not much clarity to be found after the first 2 or 3 games of each series. With the exception of two series, each matchup was tied at 1 game a piece heading into their Game 3’s. Sunday saw four Game 3’s played, with three more coming tonight. Like any other Stanley Cup Playoffs, these have already been filled with physical play and late game drama. As the weekend concluded, the Montreal Canadiens put themselves in a clinching position against the Ottawa Senators, but every other series is still up for grabs.

Saturday began with two home teams preventing themselves from getting stuck in a 2 game hole to the underdog in impressive victories. The Tampa Bay Lightning made up for their lackluster Game 1 effort by blowing out the Detroit Red Wings 5-1 in Game 2. Tyler Johnson had 2 goals for the Lightning to help lead the offense. The game also highlighted the goaltender concerns Detroit had going into the series, as Petr Mrazek was yanked after giving up 4 goals on 18 shots. The St. Louis Blues were also able to break through for their first series win, defeating the Minnesota Wild 4-1 in their hotly contested series. Vladimir Tarasenko scored an empty netter in the final minute to cap off a hat trick, while Jake Allen made some fantastic saves to preserve the Blues’ lead for the win.

The Pittsburgh Penguins look to have put their regular season slump behind them as they looked impressive in a 4-3 win over the top seeded New York Rangers to tie their series at 1. Sidney Crosby looked to be he usual self by putting in 2 goals and looked no worse for the wear after an injury scare in the middle of the 3rd period. Chris Kunitz also added 3 points with 1 goal and 2 assists.

The Anaheim Ducks, the top seed in the Western Conference, were the only team to take a 2-0 series lead in their series on Saturday by defeating the Winnipeg Jets 2-1 on a last minute goal by Jakob Silfverberg. The Ducks completed their 2nd third period comeback of the series, as they entered the frame down 1-0.

Sunday’s action got off to a dramatic start as the New York Islanders opened the final playoffs at the Nassau Coliseum with a 2-1 overtime victory over the Washington Capitals. John Tavares proved to be the Islanders’ hero once again, as he scored the game winner just 15 seconds into the extra frame in front of a crazed crowd. Capitals goalie Braden Holtby kept Washington in the game with his 40 saves in the defeat. The Islanders now lead the series 2-1. The Chicago Blackhawks also took advantage of moving onto home ice by taking care of the Nashville Predators 4-2 to go up 2-1 in their series. Backup goalie Scott Darling was once again impressive for the Blackhawks by stopping 35 shots. Chicago also got great efforts from their stars, as Jonathan Toews and Marian Hossa each had two points.

The Montreal Canadiens and Ottawa Senators are having an extremely competitive series, but the series scoreline suggests anything but. The Canadiens won by one goal for the third straight game, this time 2-1 in overtime, to go up 3 games to none and put the Senators on the brink of elimination. Dale Weise scored both goals for Montreal, which came late in the 3rd period and in overtime, in an extremely clutch effort. It was also the third straight comeback victory for Montreal, as Ottawa has scored first in each game. The Senators, who were arguably the hottest team in the league heading into the playoffs, now need to win out if they want to see the next round.

The weekend concluded with the Calgary Flames taking a second series lead over their rival Vancouver Canucks in a 4-2 victory. 18-year old Sam Bennett scored his first career NHL goal and TJ Brodie added two points to give Calgary the 2-1 series lead in front of their passionate fans all dressed in red. Bennett’s goal makes him the youngest player in NHL history to score a regulation game winner in the Stanley Cup Playoffs.

Three Game 3’s are on tap on Monday with each series moving to a new venue. Pittsburgh hosts the New York Rangers, Minnesota hosts the Blues, and Winnipeg celebrates their first home playoff game since the original Jets moved to Phoenix in 1996 against Anaheim.