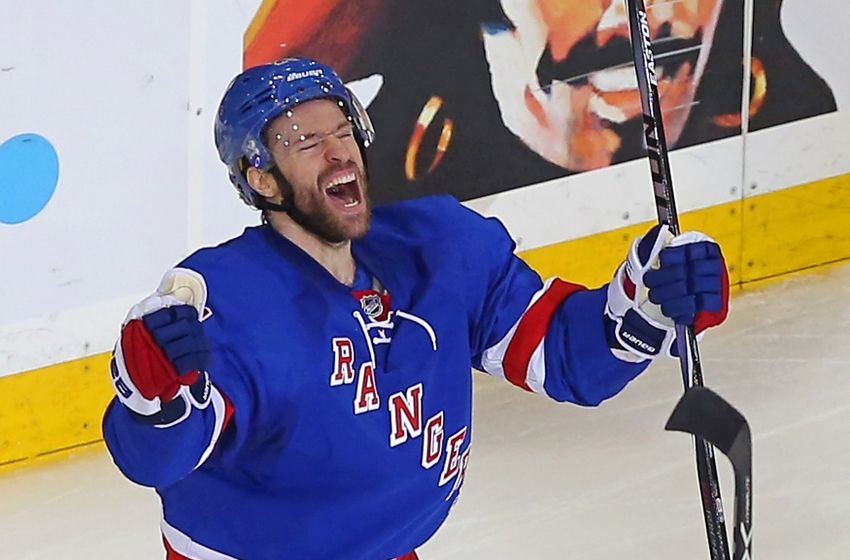 The NHL Stanley Cup Playoffs conference finals got underway this weekend with both top seeds coming away with victories at home. The New York Rangers once again used some late game magic to defeat the Tampa Bay Lightning 2-1 on Saturday in the Eastern Conference and the Anaheim Ducks played a complete game to dispatch the Chicago Blackhawks 4-1 on Sunday in the West.

After Ondrej Palat tied the game up at 1 for the Lightning early in the third, Dominc Moore put the Rangers up for good with less than three minutes to go in the game just after he had served a two minute penalty. The game was highlighted by the Rangers’ defensive efforts, as they limited the high powered Lightning offense to just one goal, with none coming at even strength. Henrik Lundqvist stopped 23 shots in back of New York’s relentless shot blocking and forechecking defense. The Game 1 victory was the seventh time the Rangers won by a 2-1 margin in these Stanley Cup Playoffs and extend a streak of one-goal playoff games that goes back to last year’s Stanley Cup Final against the Los Angeles Kings.

Out west, the Ducks continued their postseason dominance by making fairly easy work of the perennial contender Blackhawks. Frederik Andersen provided some fantastic goaltending for Anaheim, which included seeing a barrage of Chicago shots in the opening frame without letting one by. He ended the game with 32 saves. Hampus Lindholm, Nate Thompson, and Jakob Silfverberg each added on a goal and an assist to give the Ducks the scoring they needed to come out on top. The win now puts Anaheim at 9-1 for the Stanley Cup Playoffs. Chicago, meanwhile, had an uncharacteristically deflating game. The Blackhawks went 0 for 3 on the power play and didn’t get any points out of stars Jonathan Toews, Patrick Kane, Duncan Keith, and several others.

The Stanley Cup Playoffs will continue with Game 2 in the Eastern Conference Finals on Monday night. The Rangers can take a 2-0 lead on the Lightning tonight before the series heads down to Tampa.