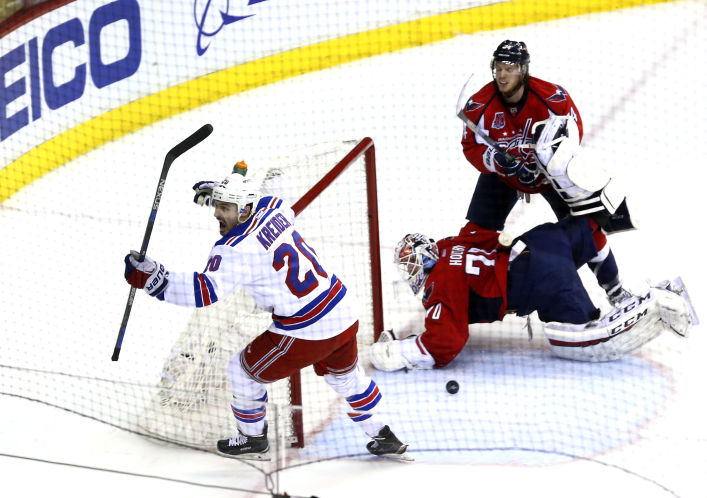 The second round of the NHL Stanley Cup Playoffs continued this weekend with the Anaheim Ducks setting up their date with the Chicago Blackhawks in the Western Conference Finals. The East picture became even more blurry, as two series that were seen to be certainties continue to carry on after wins by the Montreal Canadiens and New York Rangers, with the latter forcing a deciding seventh game at Madison Square Garden against the Washington Capitals.

On Saturday, the Canadiens continued to stave off elimination on home ice to defeat the Tampa Bay Lightning 2-1 for their second straight win and forced the series back to Florida. A late goal by P.A. Parenteau was the difference maker for the Habs, ending the 1-1 deadlock after Steven Stamkos’ goal midway through the 3rd period. Carey Price was once again huge for the Canadiens in net, stopping 24 of 25 shots. Ben Bishop was also solid in a losing effort, saving 27 of 29 shots. After the Lightning went up 3-0 in the series, their lead sits at 3-2. The Lightning will have one more chance at eliminating the Canadiens on home ice in Game 6, but all the momentum has swung in Montreal’s direction after Games 4 and 5.

Speaking of momentum, the New York Rangers have all of it after winning their second straight elimination game on Sunday. Their 4-3 Game 6 victory on the road against the Washington Capitals forces a Game 7 back in New York and has both teams in familiar territory. Chris Kreider’s two goals helped the Rangers get out to a 4-1 lead early in the 3rd period, while Henrik Lundqvist’s 42 saves helped the Rangers survive a late barrage by the Caps that cut the lead down to 1. The Rangers are looking to come back from a 3-1 series deficit for the second straight year. Last year, they did so in the second round to win the series against the Pittsburgh Penguins. If that wasn’t bad enough for Capital fans, the Capitals have already blown 3-1 series leads in the Alex Ovechkin era to get knocked out of the playoffs, most notably in a 2009 series against the bitter rival Penguins. This will be the second straight series going to a Game 7 for the Capitals, who failed to knock out the New York Islanders on their first attempt before taking care of business in the final game. Ovechkin has already guaranteed a Game 7 victory for the Capitals, taking a cue from Rangers legend Mark Messier in their 1994 Stanley Cup run. Whether or not that will work on Wednesday will be determined.

Out West, the Anaheim Ducks once again held off the scrappy Calgary Flames by coming back to tie the game, then win it off a Corey Perry overtime goal by a score of 3-2 and take the series 4 games to 1. Although Karri Ramo had 44 saves for the Flames, Calgary’s magical season came to an end with the Ducks grinding out a victory in what’s become a common sign through these playoffs. Ryan Kesler also added a tally for the Ducks in the victory. Next up for Anaheim will be the Chicago Blackhawks in the Western Conference Finals. Although both Anaheim and Chicago have been playoff mainstays in the Western Conference, this will be the first time the two franchises will meet. Given the quality of both teams, this should be a highly anticipated series to determine who makes it to the Stanley Cup Final.

The Stanley Cup Playoffs take a night off on Monday. Montreal and Tampa Bay will square off in Game 6 on Tuesday.