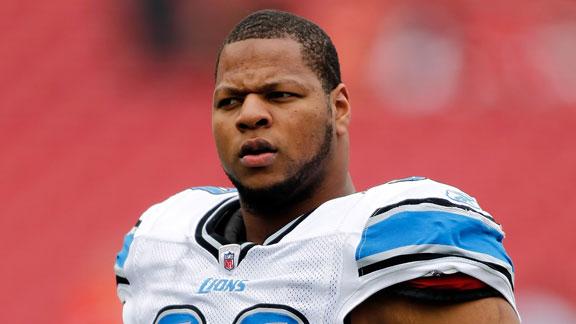 Two big names in the NFL might be going to new homes this offseason. Reports over the weekend say the Dallas Cowboys are expecting running back DeMarco Murray to test the free agency market and have yet to come up with an official offer. Meanwhile, today the Detroit Lions have announced that they will not use their franchise tag on star defensive lineman Ndamukong Suh, who is expecting to command one of the largest contracts this offseason.

These moves come on the deadline day for NFL teams to announce their franchise tag delegations. Each year every NFL team is allowed to designate one of their upcoming free agents under a franchise tag. This binds the free agent to their same team for one season if conditions are met. The player then receives a guaranteed salary for one year. Players that are deemed “exclusive” franchise players must be offered a one year deal that is no less than the average of the top five salaries of that player’s position or 120 percent of the player’s previous contract.

Had the Lions used their tag on Suh, they would have had to spend $26.9 million on him for the 2015 season. And even if they would’ve locked him up for the next season, there’s no guarantee that he would stay in the Motor City after that. The Lions will be able to negotiate a deal with Suh in a one week exclusive window before he would be able to hit the open market. Lions management are confident that they can work out a deal with Suh, which was another reason they didn’t wish to pursue the franchise option towards him.

Jerry Jones told the press on Saturday that talks with DeMarco Murray have been “going slow” and that he expects the Cowboys’ breakout running back to test free agency. Murray led the NFL in rushing last season with 1,845 yards and set a Cowboys record for most rushing yards in a season. However, his performance is going to command big money, which is something the Cowboys might not have enough room to do given their current salary cap situation. Last season, Dallas let star defensive end DeMarcus Ware go without offering a big contract. He later signed with the Denver Broncos for a guaranteed $20 million deal.

The Cowboys decided to use their franchise tag on a different offensive weapon – wide receiver Dez Bryant. Two other teams have designated their franchise players so far: the Denver Broncos and the Kansas City Chiefs. The Broncos have protected wide receiver Demaryius Thomas and the Kansas City Chiefs have done the same for 2014 NFL sacks leader Justin Houston.

The latest an NFL team can tag a player under the franchise designation is 4 p.m. EST today.