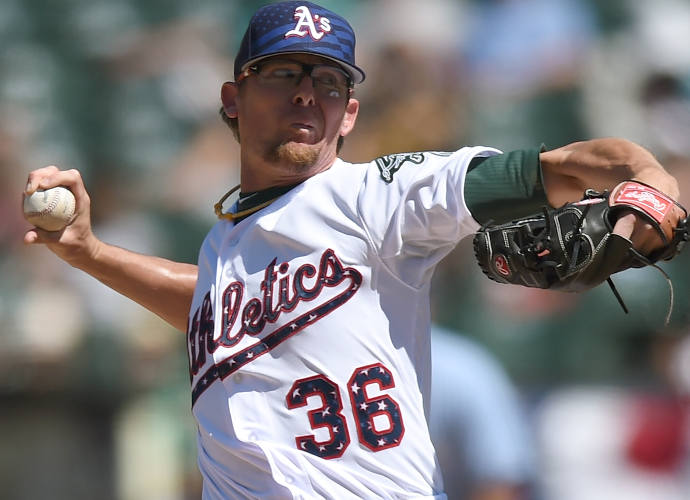 OAKLAND, CA - JULY 04: Tyler Clippard #36 of the Oakland Athletics pitches against the Seattle Mariners in the top of the ninth inning at O.co Coliseum on July 4, 2015 in Oakland, California. The Athletics won the game 2-0. (Photo by Thearon W. Henderson/Getty Images)

Alderson, who previously has been inactive during previous trading deadlines, is illustrating his motivation for a postseason run this year. While they already received Clippard, the Mets are still trying to get his former teammate, utility man Ben Zobrist, to join the team. With these moves and potential for more, the Mets are in a solid place, as return to play only two games behind the Washington Nationals in the national League East.

Clippard, a two time All-Star, is a reliable and tested veteran reliever who is being looked at to fill the eighth inning void between their starters and closer Jeurys Familia. While with Oakland, he had a 2.79 ERA with a 1.19 WHIP in 38.2 innings equaling 38 strikes and 21 walks. While with the Nationals, Clippard had a 2.18 ERA (17 earned runs/70.1 innings) with 82 strikeouts in 75 games. Last year, he held led the MLB with 40 holds. He is currently owed $3 million, but it shouldn’t be a problem for the Mets, whose moves, brought top prospect Michael Conforto to the team while trading Juan Uribe and Kelly Johnson, and put the Met’s payroll at $101 million.

The reliever role was initially for Bobby Parnell, but only a month after his return to the majors, it is doubtful if he can pitch being only 16 months removed from Tommy John surgery. He has not yet produced the speed he showcased in 2013 when he saved 22 games for the Mets, but that may be due to his time outside of the majors.

While taking Clippard, the Mets have blocked the Nationals from advancing past their weaknesses in the bullpen as it will be a battle of attrition for the National League East down the stretch.