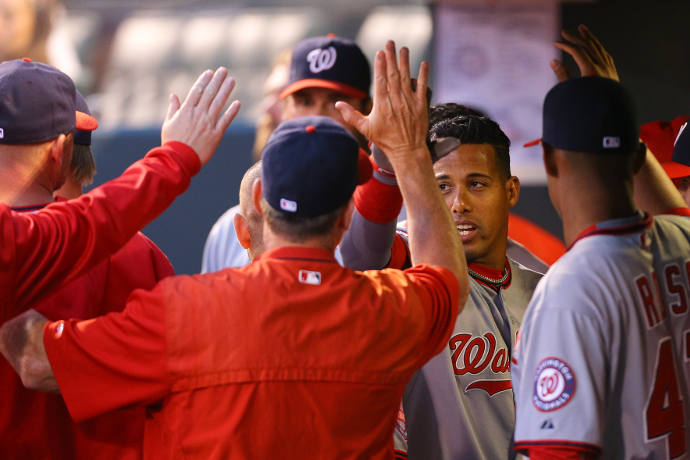 In a Washington Nationals 15-6 frustration win over the Colorado Rockies, Yunal Escobar helped lead the team to end a six game losing streak by hitting a homer and driving in four runs.

When asked about the win after the six game skid, Nationals manager Matt Williams focused on his team’s progressive tenacity. “We came out offensively and had a good approach tonight,” he said. “This ballpark, you never know. Six is never safe, so we stayed on it, kept with it and kept adding runs. So that’s a good sign for us.”

After four highly eventful innings, and being behind, the Rockies managed to pull even at  6-6 during the fifth after Nolan Arenado’s RBI double and it was followed up in the sixth, with Kyle Parker’s  solo homer. However, while the Rockies offense managed to take advantage of opportunities, Colorado’s bullpen was not able to close out strong, leading to the Nationals scoring eight runs in the last two frames.

Due to their losing streak, it comes to no surprise that the Nationals players felt good about this win. Shortstop Ian Desmond said, “It felt good. I think the best part is the fact that we came back. We bounced back, made a couple of mistakes, but we didn’t let it hold us down. It was a good sign.”

But now, management has to look for something different, as pitcher Carlos Gonzalez may be placed on the DL after coming out of the game at the bottom of the fifth citing right knee inflammation. Gonzalez

“I was like, ‘I’m a little sore, I’m going to try to stay in the game,’ then Walt took me out and gave me rest,” Gonzalez said.

But in any case, the Nationals are now on a one game winning streak, and with the playoffs inching closer and closer, they want to make sure all their players are in tip top shape before they enter the post season.