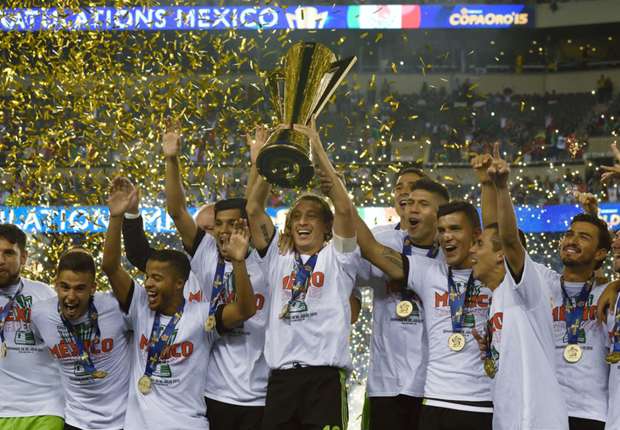 For the seventh time in its history, Mexico’s the CONCACAF Gold Cup champion as the best team in North and Central America and the Caribbean.

Mexico defeated Jamaica by a score of 3-1 in the Gold Cup Final in Philadelphia on Sunday. The victory capped off a tournament of struggles and controversy for the Mexican team. Ultimately the bumpy road was the one worth taking as the Mexicans left with the Gold Cup and a chance to compete in the FIFA Confederations Cup.

Andres Guardado kicked off the scoring in the 31st minute to put the Mexicans ahead 1-0. Jesus Corona started the second half in Mexico’s favor with a 47th minute tally, while Oribe Peralta added a goal of his own in the 61st minute. The Jamaicans managed a goal in the 80th minute off the foot of Darren Mattocks in the 80th minute, but it would only merely prevent a shutout as Mexico took the championship in a 3-1 final.

While the weekend was a triumph for Mexico and a reassuring sign of security for head coach Miguel Herrera, it was a nightmare for the U.S. Men’s National Team and Jurgen Klinsmann. The Americans lost in penalty kicks to Panama in the third place game on Saturday in Chester, PA by a score of 1-1, with the PK’s going 3-2 to Panama’s favor. The 4th place result is the United States’ worst finish in the CONCACAF Gold Cup since 2000. Although the U.S. looked to be the team to beat after friendly victories over The Netherlands and Germany and a strong group stage, a shocking upset to Jamaica in the semifinals and the subsequent loss to Panama derailed the Americans’ Gold Cup campaign.

Mexico will now face the United States in a playoff to determine CONCACAF’s representative in the 2017 FIFA Confederations Cup. The match will reportedly be played in October at the Rose Bowl in Pasadena, CA. Although the match would be on American soil, the home field advantage will likely be neutralized by the Mexican team’s strong support in Southern California as well as by fans making the short trek across the border. The winner will then compete against the world’s best in Russia in 2017.