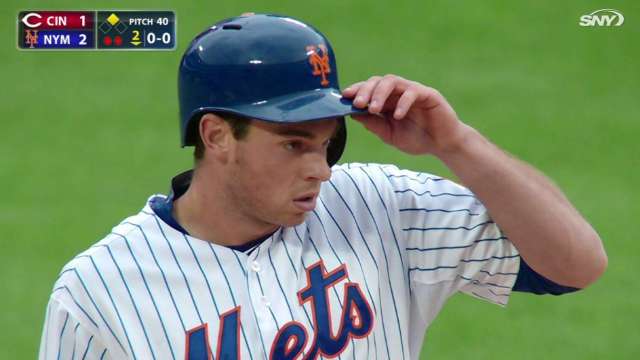 Steven Matz had a day he’ll never forget by making his Major League debut for the New York Mets on Sunday. What made it even more special wasn’t the great performance he had on the mound in the Mets’ 7-2 victory over the Cincinnati Reds, but rather his day at the plate. Matz went 3-for-3 for New York and drove in four of their seven runs.

In front of his family and friends, Matz got to play for his beloved Mets for the first time. Matz grew up rooting for the team in nearby Stony Brook, NY on Long Island. He dazzled on the mound after recovering from a leadoff home run with an impressive 7 2/3 inning performance with 2 earned runs and 5 hits given up. But at the plate, Matz gave a boost to an offense than usually struggles at the plate.

In the 2nd inning, Matz hit a two run double off Josh Smith to give the Mets the 2-1 lead. He then hit for a single and then a bases loaded single in the 6th to score two more for the Mets. In doing so, he’s the first pitcher in Mets history to hit in his first three plate appearances.

The anticipation for the start was high enough to begin with for Matz, but he had to wait an extra 3 1/2 hours to get on the field. The Mets and Reds had to complete a rain delayed game from the nigh before, which ended up going 13 innings. The Mets won the first game of the doubleheader 2-1 to start off the day.