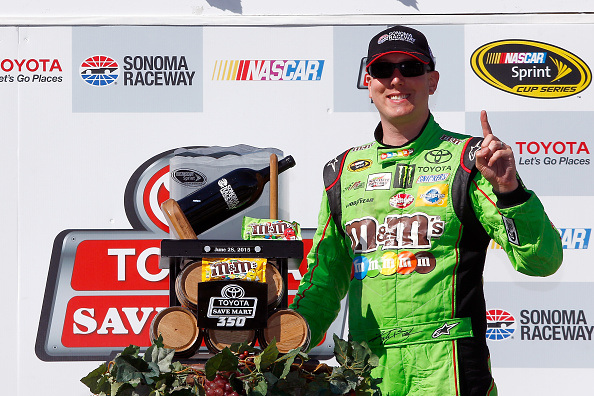 Kyle Busch Wins For First Time Since Injury at Sonoma

Just four months ago, NASCAR star Kyle Busch was sitting out with a leg injury after an awful crash at Daytona in the Xfinity Series race. Now he’s back in victory lane after a gusty performance at the winding road course of Sonoma Raceway. Kyle Busch took the lead from Jimmie Johnson late to grab the win at the the Toyota/Save Mart 350. Brother Kurt Busch finished 2nd, marking the first time in their careers that the Busch brothers finished 1-2 in a Sprint Cup series race.

Kyle Busch ran well throughout the day and took advantage of a late caution to come in and pit to grab four fresh tires. Leader Jimmie Johnson, who was dominant throughout the second half of the race, decided with crew chief Chad Knaus to stay out. The decision made Johnson a sitting duck, as everyone outside of five drivers came in to pit. On the ensuing restart, Busch passed Clint Bowyer and began to pick off cars that were on worn out tires. By lap 106, Busch had caught up to Johnson and took the lead away from him. Kurt Busch made his way up to 2nd and was quickly coming up on his brother, but it was too late as Kyle came away with the checkered flag. Bowyer finished 3rd, followed by Kevin Harvick and Joey Logano to round out the top 5. Johnson would settle for a 6th place finish.

With the win, Kyle Busch can attempt to cap off a remarkable comeback with a bid in the Chase for the Sprint Cup. NASCAR gave him a waiver to earn a Chase bid should be finish top 30 in points despite the fact he missed the season’s first ten races. It’s certainly manageable for Busch to do so, as he sits about 140 points away from 30th, which is a little over three races worth. With inferior competition ahead of him in the standings and a projected average finish of 13th being good enough to get himself in position, Busch might be able to pull off one of the biggest rebounds in NASCAR history.

The points standings remained relatively unchanged at the top, with Kevin Harvick leading Martin Truex, Jr. and Joey Logano. Jimmie Johnson jumped over Dale Earnhardt, Jr. for 4th in points. Ryan Newman has a four point lead over Aric Almirola for the 16th and final spot in the Chase for the Sprint Cup.