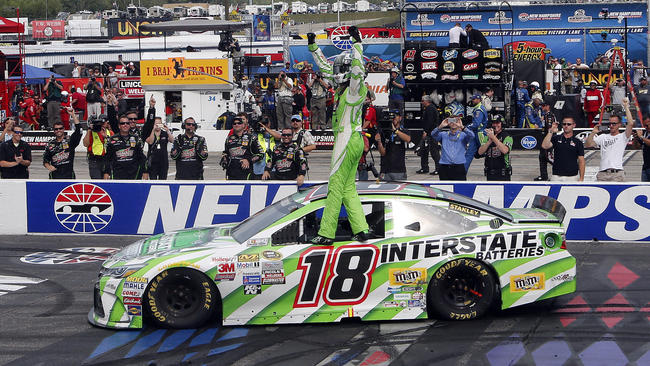 The long absence of Kyle Busch from NASCAR’s top series seems like an eternity ago, as the driver of the #18 Interstate Batteries Toyota has made his presence felt since returning from a broken leg. So much so that Kyle’s the hottest driver on the circuit. On Sunday, Busch won the 5 Hour Energy 301 at New Hampshire Motor Speedway to win his third Sprint Cup Series race of the season, all coming in the past four races, to help inch his way closer to a berth in the Chase for the Sprint Cup.

Kyle Busch’s win didn’t look like it was going to happen with just 57 laps to go, as he had to make an unscheduled pit stop with what he thought was a flat tire. However, the pit stop ended up being the best thing for Busch, as he was soon able to pass leaders Brad Keselowski and Kevin Harvick to get back on the lead lap. Shortly thereafter the caution flew for fluid on the track, allowing Busch to stay out while everyone else had to pit. This gave Busch the lead and some very beneficial track position compared to his rivals. From the restart on, Busch led the rest of the way and held off a late charge by Keselowski to take the checkered flag under caution, which flew after Alex Bowman crashed on the final lap.

The win moves Kyle Busch one step closer to the 30th place criteria that he needs to meet to make the Chase for the Sprint Cup. NASCAR granted him a waiver after his injury to allow him to compete for the Sprint Cup championship as long as he won a race and finished top 30 in the points standings. Busch’s deficit continues to shrink, as he’s now just 58 points behind David Gilliland for 30th place with seven races to work with.

Kevin Harvick remains the overall points leader, growing his lead over 69 points over Joey Logano. Aric Almirola moved into the final spot in the Chase standings, as he sits in 16th as the last driver that would make the playoff system on points at the moment. Clint Bowyer is now the first driver out at 17th.

Next weekend the NASCAR Sprint Cup Series will move on to the famed Indianapolis Motor Speedway for the annual running of the Brickyard 400.