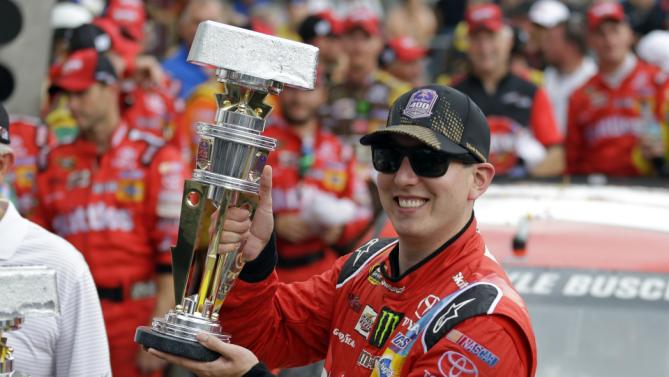 The Summer of Kyle Busch rolls on, as the NASCAR star won his third race in a row, fourth in five races, and arguably his biggest victory of his career as he won the 2015 Brickyard 400 on Sunday. The win is his fourth in just nine races on the season, which was delayed after breaking his leg in an accident in the Xfinity Series race at Daytona. It also puts Kyle Busch just 23 points away from a berth in the NASCAR Chase for the Sprint Cup with six races to go before the playoffs.

Kyle Busch took advantage of a series of late restarts to pass leader Kevin Harvick, then continued his excellent short run ability by holding off Harvick and Joey Logano to cross the yard of bricks in first. The win not only continued his winning streak, but also completed a weekend sweep at the famed Indianapolis Motor Speedway. Busch also took the checkered flag on Saturday in the Xfinity Series race. The win also marks Kyle Busch’s second win in a “Grand Slam” event, which is seen by most NASCAR observers as the Brickyard 400, Daytona 500, Coca-Cola 600, and Southern 500– the latter of which he won in 2008.

Logano finished behind Busch for 2nd, unable to recover from going loose in turn 1 in the race’s green-white-checkered attempt. Harvick settled for 3rd, while Martin Truex, Jr. returned to form in 4th and Denny Hamlin provided another boost to Joe Gibbs Racing’s great weekend with a top 5. Clint Bowyer, Matt Kenseth, Kurt Busch, Kyle Larson, and Brad Keselowski rounded out the top 10.

The final trip to IMS for Indiana native Jeff Gordon would be a heartbreaking one, as the four-time champion and five-time Brickyard winner crashed on lap 50 trying to avoid Bowyer’s car. Gordon finished the race 42nd, dropping him to 11th in standings and putting him closer to the Chase bubble in his final season as he continues to search for his first win of the year.

Kyle Busch now sits just 23 points away from 30th place driver Justin Allgaier to clinch a spot in the Chase for the Sprint Cup. After returning from injury, NASCAR granted Busch a waiver to compete for the championship as long as he won a race– which has clearly been no problem for him– and finished top 30 in points. Kyle’s brother Kurt Busch clinched his spot in the Chase on Sunday for good with his top 10 finish, which ensures he will finish the regular season in the top 30. Clint Bowyer is the driver on the bubble, as he sits in 16th 30 points ahead of Aric Almirola. Once Kyle Busch enters the top 30, however, the bubble would shift to Kasey Kahne, who’s 20 points better than Bowyer.

The NASCAR Sprint Cup will move on to Pocono on Sunday for the Microsoft 10 400. Six races remain until the NASCAR Chase for the Sprint Cup field is set.

Read more about:
NASCAR Sprint Cup Series
Listen to the uInterview Podcast!
Get the most-revealing celebrity conversations with the uInterview podcast!