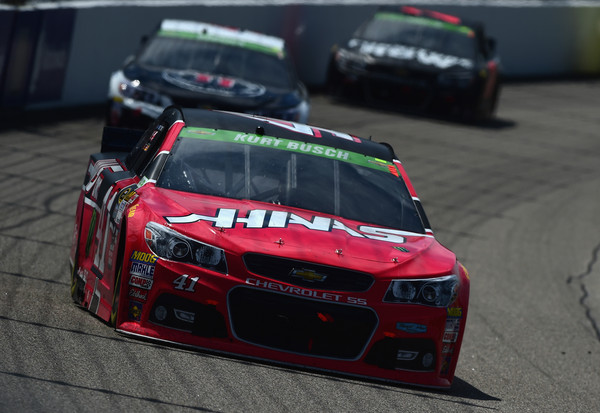 Kurt Busch was dominant on Sunday at Richmond International Speedway’s Toyota Owners 400, leading 291 of 400 laps to win the rain-postponed event. It was the first NASCAR Sprint Cup Series win for Busch since he was reinstated by NASCAR on March 11th after serving a three race suspension for domestic violence charges. The win, thanks to a waiver given to him by NASCAR, all but puts Busch into this season’s Chase for the Sprint Cup.

“It’s an incredible feeling,” Busch told reporters after the race. “It’s a total team effort. And the way that everything came together, it just seemed like we were building, building and building towards a great finish like this.”

Kurt Busch was suspended before the Daytona 500 as a domestic violence case against him was being investigated by Delaware authorities. After a judge dropped the charges, Busch was reinstated by NASCAR and able to get back behind the wheel of his #41 Stewart-Haas Chevrolet. Since then, he’s come knocking on the door of a victory, including leading at the start of a green-white-checkered at Auto Club Speedway. On Sunday, he was finally able to get back to victory lane.

Even with missing the first three races, Busch is up to 18th in points, making him easily eligible for the Chase for the Sprint Cup. NASCAR had granted Busch a waiver for the playoff system if he won a race, but he probably won’t need it. Finishing top 30 in points with a win gets you into the Chase and Busch has already given himself a buffer. In just six races, Kurt Busch has already put up three top fives on the season.

Teammate Kevin Harvick had another great day on Sunday, finishing 2nd. It’s Harvick’s 8th top 10 of the season and whopping 7th top 2 finish in 2015. Jimmie Johnson came from back in the pack to finish 3rd, giving him his 5th top 5 in the young season. Jamie McMurray had an impressive 4th place finish to bump him up to 9th in points, while Joey Logano got his 8th top 10 by rounding out the top 5.

The NASCAR Sprint Cup Series will move onto the wildly unpredictable Talladega next weekend. Denny Hamlin was last year’s event winner, but any one of the 43 drivers in the field has a shot at winning with the restrictor plate pack racing and large pileups that can take out contenders.

Read more about:
Kurt Busch NASCAR Sprint Cup Series
Listen to the uInterview Podcast!
Get the most-revealing celebrity conversations with the uInterview podcast!