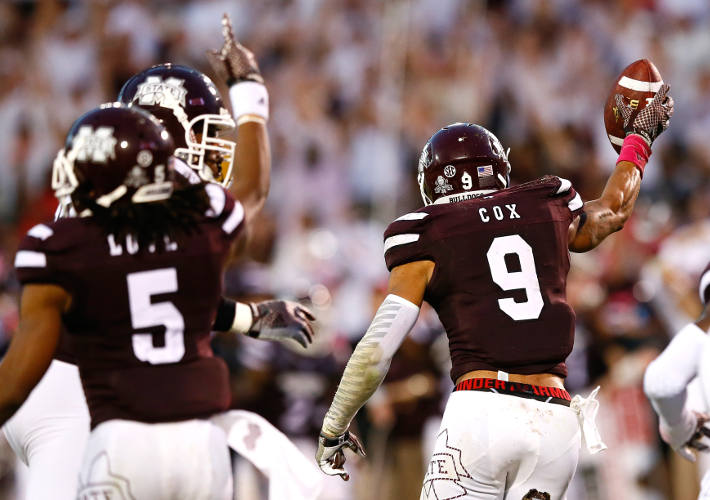 Justin Cox #9 of the Mississippi State Bulldogs celebrates intercepting a pass by the Auburn Tigers in the final minutes of their 38-23 win at Davis Wade Stadium on October 11, 2014 in Starkville, Mississippi. (Photo by Kevin C. Cox/Getty Images)

NFL rookie defensive back Justin Cox didn’t realize there was a zero tolerance policy regarding law breaking, and was subsequently waived off of the Kansas City Chiefs after being arrested and stuck with multiple charges Monday in Starkville, Miss.  Cox, was charged with domestic assault, burglary and trespassing in a recent incident and is being held on $40,433 bond.

He is no stranger to these types of charges. This as is the second time in the past year that Cox has been arrested for an incidence of domestic violence even though the previous charges were dropped. In that case, he pleaded guilty to a misdemeanor charge of trespassing in January.

Cox, who played football out of Mississippi State, signed with the Chiefs after going undrafted due to his issues off the field. During his college tenure, he had a career total 52 tackles and two interceptions but was suspended the final three games of his college term after his arrest.

The Chiefs made no other statement.