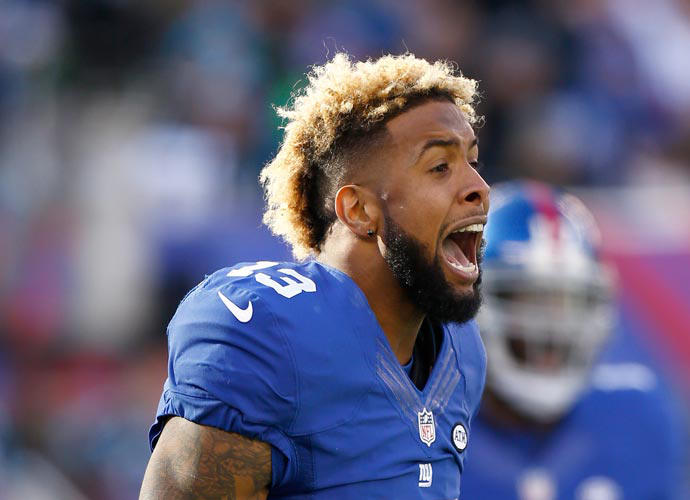 EAST RUTHERFORD, NJ - DECEMBER 20: Odell Beckham #13 of the New York Giants reacts after a scuffle in the first quarter against the Carolina Panthers during their game at MetLife Stadium on December 20, 2015 in East Rutherford, New Jersey. (Photo by Jeff Zelevansky/Getty Images)

During yesterday’s game at Metlife Stadium, it seemed as if the ongoing battle between Carolina Panthers cornerback Josh Norman and New York Giants star wide receiver Odell Beckham Jr. was never going to end. Throughout the game, both players were found to be in scuffles and taunting matches after every single down whenever the Giants had possession of the football. The incident that took it over the edge was when Beckham decided to run back to Norman while he was on the ground, resulting in a helmet-to-helmet collision. In total, Beckham was called for three personal fouls of unnecessary roughness and is due for a one-game suspension by the NFL, even though it has not been officially announced what punishment Beckham had to face.

Norman has been voicing his displeasure at the receiver after the game, most notably talking with ESPN Radio’s Mike and Mike. “And yeah, that man had the Joker cleats on, he knew what he was doing. That man knows what he was doing. That’s no Joker, man, that’s no Joker. That’s Harvey Dent, that’s Two-Face [Dent is Two-Face’s alter ego]. That’s who he is,” said Norman. “I can respect the Joker because at least he would give me a sweet contest. He would give me a sweet epic battle, but that right there was a melee. How can you respect a guy like that, that was ridiculous.” Norman called for Beckham to be ejected in yesterday’s game and questioning why the league did not take action in this matter. “I mean I don’t see how they didn’t see that from up top. Ring down and be like, ‘Get this guy out of here.’ They ring down for everything else. I mean concussion protocol, I had to get checked out myself. I’m going to go in there and get checked out again. I mean that was crazy. But at the end of the day, they got it right, they got the call right, they saw what’s up,” he said.

After the game, Beckham, who finished the game with 76 yards receiving and one touchdown, would not answer questions regarding Norman and only said that it was “unfortunate” the Giants lost the game. Giants head coach Tom Coughlin had stated that he talked to Beckham before the game about keeping his cool. “We had discussed prior to the game, going in, what the expectation would be, and he thought that that was all behind him,” Coughlin said. “But he did lose his composure…. I’ll talk to him about it, and I’m not going to discuss anymore. Whatever we have to discuss, we will discuss in private.”

The Giants were at one point losing 35-7 to the Panthers before starting up a 28-point comeback before losing 38-35 because of a Panthers field goal. The Panthers remain undefeated for the season with two games left while the Giants somewhat have a shot to win the NFC East.

Photo: EAST RUTHERFORD, NJ – DECEMBER 20: Odell Beckham #13 of the New York Giants reacts after a scuffle in the first quarter against the Carolina Panthers during their game at MetLife Stadium on December 20, 2015 in East Rutherford, New Jersey. (Photo by Jeff Zelevansky/Getty Images)