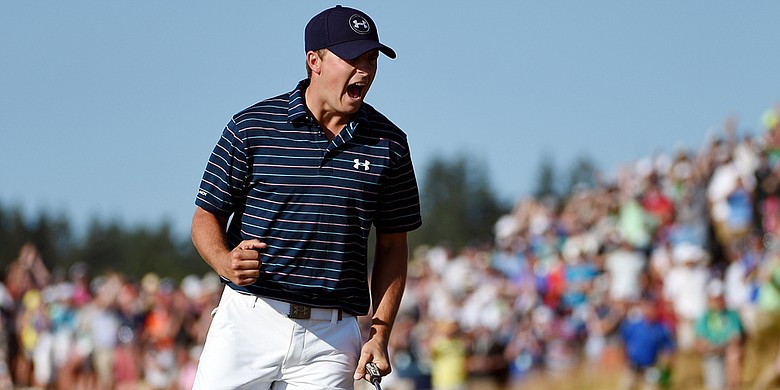 Jordan Spieth has done quite a bit for a 21 year old. In April, he took home The Masters for his first major tournament victory. Two months later, he can add “US Open Champion” to the list.

Spieth won the 2015 US Open at Chambers Bay on Sunday with a round of 69 to finish the tournament 5 shots under par. Spieth not only survived the difficult Chambers Bay course, but also a crowded field at the top of the leaderboard.

Spieth began the day in a four way tie at the lead at -4 to start his round. Things were going smoothly for him until the 17th hole, where he hit a double bogey on the par 3 hole to send him into a tie with Louis Oosthuizen for the lead. Spieth recovered on the final hole by hitting a birdie on the par 5 to put himself on the outright lead at -5.

Dustin Johnson loomed large on the course by birdieing the 17th and had a shot at winning the US Open by making the green on just 2 shots on the 18th hole. However, heartbreak once again hit Johnson, as he missed both his eagle and birdie putts to settle for par and finish the tournament one shot behind Spieth. Johnson’s birdie opportunity was the most gut-wrenching, as he missed a fairly short putt that would’ve forced a Monday playoff for the US Open championship. Instead Johnson, who’s yet to win a major tournament, had arguably his most haunting moment yet.

Johnson at least has an excuse, as the greens on Chambers Bay were extremely difficult as a result of elevation changes and dry conditions in University Place, WA. The USGA was put under heavy fire by golfers for their handling of the course through the weekend. Billy Horschel, who was visibly frustrated throughout Sunday, told Fox in a post-round interview that he “lost a lot of respect for the USGA” after their handling of the greens. Ian Poulter also came out against the USGA, saying the greens were “disgraceful.”

Australians Adam Scott and Cameron Smith tied for 4th place by finishing the tournament two shots behind Spieth. Jason Day fought through the weekend after being hospitalized with vertigo on Friday to have a strong third round and ultimately finish in the top 10 at even par. Day’s condition may have been the result of Chamber Bay’s layout, which is considerably larger than most US Open courses and can cause golfers to be disarrayed by its steep walks and constant turns. Rory McIlroy finished strong to finish his tournament at even par in 9th place. Phil Mickelson, on the other hand, saw his fortunes turn for the worse over the weekend and had to settle for a 64th place finish at +13.

Spieth now has a shot at completing golf’s grand slam this year. Next on the horizon is the British Open at St. Andrews in July, followed by the PGA Championship in August at Whistling Straits. It’s worth noting that both of those courses are links-styled like Chambers Bay, with St. Andrews being the originator of that design. Even if he doesn’t complete the slam this year, Spieth’s future is looking very bright with titles at The Masters and the US Open at just 21 years old. Golf’s once-bleak future now looks very bright with young stars such as Spieth performing at a high level, with their best days potentially still ahead of them.