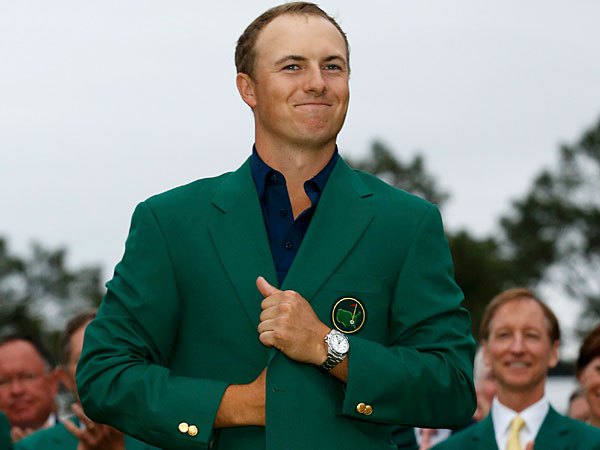 21-year-old Jordan Spieth put the golf world on notice with his opening round score of 64 on Thursday at Augusta. He ended up doing much more than that. Spieth finished the weekend at -18 to easily take a wire-to-wire victory at the 2015 Masters tournament, tying Tiger Woods‘ record for the lowest tournament score at a Masters.

The Texas native shot two rounds of 70 over the weekend to pad his lead and comfortably take the green jacket by 4 shots over Phil Mickelson and Justin Rose. Although he bogied on the 18th hole on Sunday, Spieth will still go down in history for having the lowest round in Masters history alongside Woods, who shot -18 in 1997. He’s also become the second youngest golfer to win the Masters, with Tiger’s 1997 performance again setting that mark. Spieth’s performance was also the first wire-to-wire victory at a Masters since Raymond Floyd did so in 1976.

Spieth’s performance shattered records, but many other golfers impressed over the weekend. Phil Mickelson, who had been struggling in the past year, had a great weekend, shooting 67 and 69 in the final two rounds to mount a charge to a 2nd place finish. Mickelson told reporters that he’s mainly focusing on the bigger tournaments, so it might not be a surprise to see him contend for some more majors in the future.

Tiger also looked to be in much better form than he had been in the past year. Although a rough round of 73 on Sunday dropped him down to a 17th place finish, Woods showed some very good signs of improvement and could be heading in the right direction.

World number one Rory McIlroy didn’t get the green jacket that was missing from his majors collection, but he still looked impressive after this weekend. Rory shot a 68 and a 66 in the final two rounds to finish 4th in the only major he has yet to win in his young career. After winning two majors last year, McIlroy could be poised to win another one in the summer months ahead. And with a good showing at the Masters, Rory showed he could compete at Augusta and be in the hunt for completing his career grand slam in the future.

But the main story of the weekend is Spieth. Spieth was already ranked fourth in the world heading into the weekend and was quickly climbing his way up. The Masters is already his 3rd win in the PGA Tour’s 2015 season, which also includes a runner-up finish after a playoff in Houston. His win at Augusta sets him to new heights and puts him on track to become one of the world’s best.

With American golf needing a fresh face after Tiger’s injuries and Mickelson’s struggles, Spieth might just be the new face for the sport in the United States. And with the way Spieth and McIlroy are playing, we might soon have a battle for golf dominance between the two. That in itself might be the biggest victory of the weekend, as the sport of golf now has a new storyline that fans can enjoy for a long time to come.

Read more about:
Golf The Masters