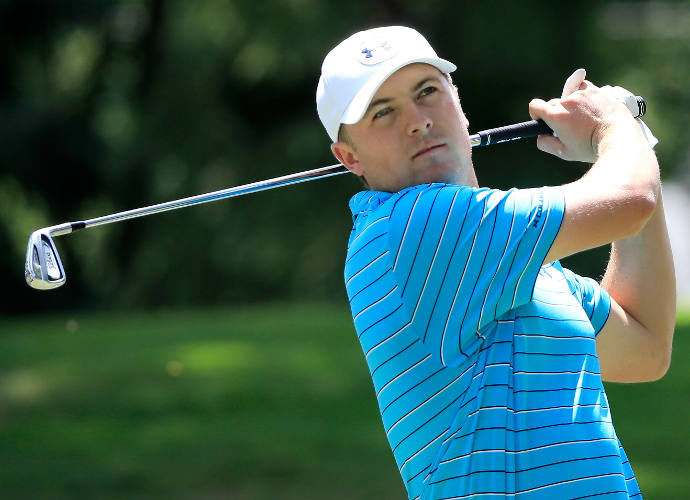 AKRON, OH - AUGUST 04: Jordan Spieth of the United States plays a shot during a practice round for the World Golf Championships-Bridgestone Invitational at Firestone Country Club South Course on August 4, 2015 in Akron, Ohio. (Photo by Sam Greenwood/Getty Images)

Jordan Spieth Tops Rankings At Firestone, No Woods and McIlroy

The number two in world ranking, Jordan Spieth, will be the star attraction at this week’s WGC-Bridgestone International as fellow competitors Tiger Woods and Rory McIlroy failed to show up. Spieth is currently on a good track record as he won both the Masters as well as the US Open.

Of the absentees, it is a disappointment to many fans that McIlroy will not be able to defend his title after he ruptured a ligament in his left ankle due to a friendly soccer game. Last year, McIlroy won the Firestone Country Club tournament by two shots.

And the down on his luck, Woods did not even qualify for the World Golf Championships due to his dropping stock and ranking to an abysmal 262nd place. It is also a disappointing to see Woods not play, as he has won a record eight times at the Firestone, possibly having a better showing than either Spieth or McIlroy.

When asked about Wood’s no-show, fellow golfer Jason Day (ranked number four worldwide) said that it is “unfortunate” that he is not able to play at a venue where he “plays and wins a lot.” He also says that it is weird to see Woods play at the level he is, as his ability is so much greater.

If Spieth is able to win at this Firestone, he will replace McIlroy at the top of the food chain, but he sees it as more of a warm-up to the prestigious PGA Championship at Whistling Straits next week.

“This is a huge event. This is one that everyone wants to have on their resume, and there are certainly other goals that come out of trying to win this week too for me personally,” said Spieth after being interviewed with the media about the games.

“So ultimately, we`re working really hard for this one to try and grab the number one slot.”

Spieth has never won a WGC, so he will certainly be putting his heart onto the greens.

Good luck to you, Spieth.