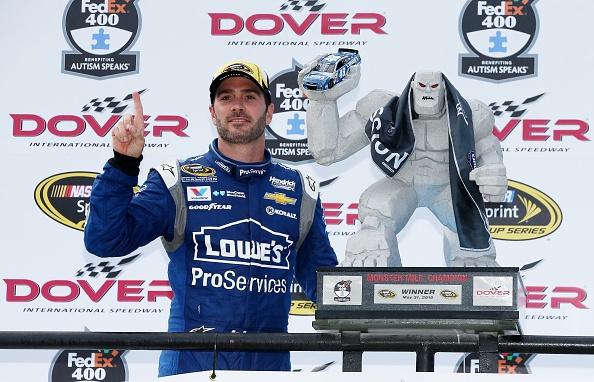 Jimmie Johnson drove his #48 Lowe’s Chevrolet to victory at Dover International Speedway on Sunday in the FedEx 400, giving him his 10th victory at the concrete track. The win made Johnson only the fifth NASCAR driver to ever win at least ten races at one track. It was also Johnson’s fourth victory of the season with 13 races gone by.

After starting the race 14th, Johnson worked his way to the front and led the race’s final 23 laps. Johnson and crew chief Chad Knaus made a gutsy call to stay out on old tires during a late race caution, grabbed the lead on the restart, and held off a charging pack on fresher tires. Johnson also had to survive a green-white-checkered two lap overtime, which gave the rest of the field one last chance to catch him after Johnson was previously pulling away to victory.

Johnson joins elite company in those who have won 10 races at a track. Richard Petty, Darrell Waltrip, Dale Earnhardt, and David Pearson are the only other four drivers who have accomplished the feat.

Kevin Harvick, also on older tires, was able to push Johnson on the final restart and get himself a 2nd place finish, giving him his whopping 9th top 5 finish of the season. Kyle Larson, Kasey Kahne, and Aric Almirola all had great runs to round out the top 5. Martin Truex, Jr. came close to contending for his first win of the season, but a dustup on the final restart meant he had to settle for 6th. Still, it is Truex’s 12th top 10 finish in 13 races. Harvick has a 44 point lead in the traditional points standings, while Johnson leads the “Chase Grid” setup for the Chase for the Sprint Cup alignment with his four wins.

The completion of Dover means the regular season is halfway over. Currently, nine drivers have wins on the season to qualify for the Chase for the Sprint Cup playoff automatically. Seven drivers would make their way in on points, but those spots are sure to dwindle as more drivers get their way to victory lane. The NASCAR Sprint Cup Series will move on to Pocono Raceway next Sunday.