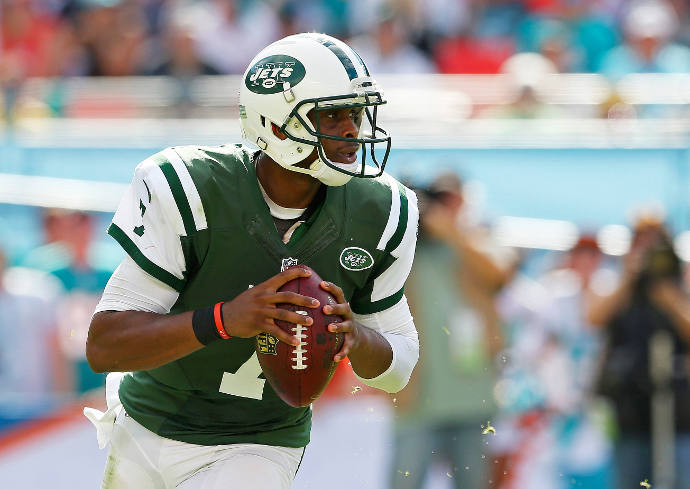 during a game at Sun Life Stadium on December 28, 2014 in Miami Gardens, Florida.

With a rash of training camp fights occurring, specifically involving quarterbacks — Cam Newton, cough, cough — the New York Jets seemed to want to have a piece of the action. Unfortunately for them, instead of the pushing ideal with the Panthers, starting Jets quarterback, Geno Smith will now be out for six to ten weeks due to a broken jaw after locker room fight.

When asked about what happened, Bowles said,

“There was an altercation in the locker room. It had nothing to do with football. It was something very childish. He got cold-cocked, sucker-punched, whatever you want to call it. You can’t tolerate that. When you have a team and a bunch of side issues you can’t tolerate that. You don’t walk up to another man and punch him in the face.”

After the incident, Enemkpali was kicked off the team. Perhaps he should try a different sport – boxing, perhaps?

But it did not seem as though the linebacker was truly a Jet, playing only 40 snaps last season after being a sixth round draft pick. Prior to his NFL career, he was suspended by his college team at Louisiana Tech for punching an off duty police officer.

Enemkpali has issued the following apology:

“I apologize to the Jets organization, coaches, teammates, and fans. Geno and I let our frustration get the best of us, but I should have just walked away from the situation. I deeply regret and apologize for my actions.”

And walk away, he should have, as morning show, Regis and Kelly said that the cause of the attack was for $600. As part of the NFL, one would think that players making big bucks would be over such petty nonsense, but alas here the Jets are.

In Smith’s place is Ryan Fitzpatrick, who has a career 19,273 passing yards on 2,911 and 123 touchdowns. With Smith’s inconsistent play and Fitzpatrick being a league veteran, Smith may have to claw his way to “be back.”