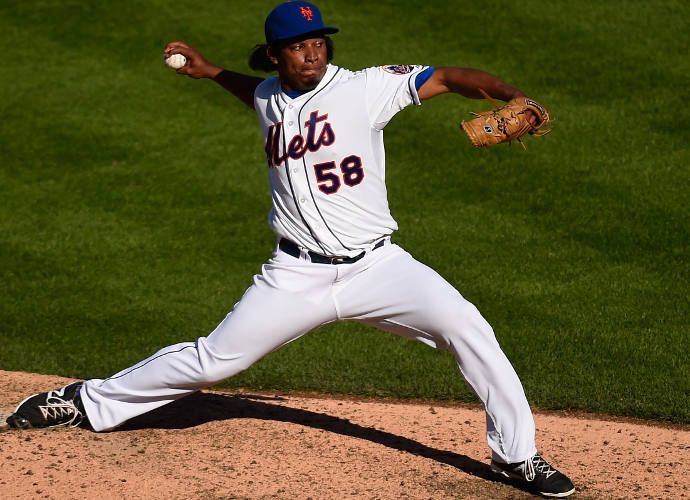 at Citi Field on September 28, 2014 in the Flushing neighborhood of the Queens borough of New York City.

It’s just like high school – people who get suspended, continue to get suspended – as New York Mets reliever, Jenrry Mejia was banned for 162 more games after just coming back from an 80 game suspension after testing positive for performance enhancing drugs.

When he was first suspended in April 11 for positive Stanozolol testing, Mejia said that he, “I can honestly say I have no idea how a banned substance ended up in my system.” This time, it is Stanozolo and Boldenone, which if he doesn’t know how it got into his body, he really needs to see somebody, because that just doesn’t sound healthy. Both the penalties combined will set Mejia back a significant sum – $2,112,869 of his $2,595,000 salary.

Even the Mets general manager doesn’t understand how it could happen again, and in such a close time frame from his last suspension. Alderson just “couldn’t understand it.” He said that,

“I was totally shocked. Incredulous — whatever the right term is — that this could happen so swiftly on the heels of a past suspension. Couldn’t understand it.” “I think not surprisingly there’s a tremendous amount of disappointment. I think to some extent, anger. To some extent, amazement that this could happen so soon after a previous suspension was completed, and some sadness, in the sense that this is having a tremendously adverse effect on a very promising major league career — and that’s a shame. But the rules are the rules. We support the rules. And this is the consequence of making bad choices.”

It is a setback for the Mets, but it isn’t a terrible, as they recently acquired Tyler Clippard in trade on Monday. After the first suspension, the MLB attempted to monitor the pitcher by subjecting him to six urine tests and three blood tests of a 12 month period after his violation. Now, as he failed one of them, Mejia will have to sit out of the next 63 games of this, even the playoffs (if they make it), and if they don’t his suspension will carry into next season – equaling the first 99 games of the year.

Maybe next time Mejia will know how things end up in his body.