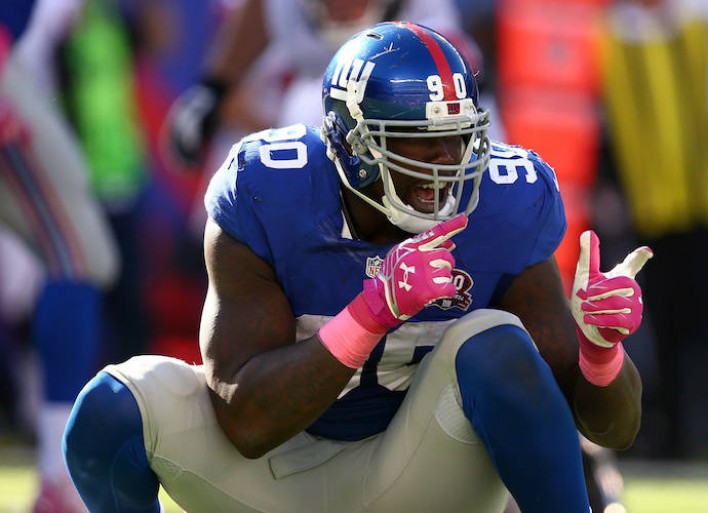 EAST RUTHERFORD, NJ - OCTOBER 05: Defensive end Jason Pierre-Paul #90 of the New York Giants reacts after a play in the fourth quarter against the Atlanta Falcons during their game at MetLife Stadium on October 5, 2014 in East Rutherford, New Jersey. (Photo by Elsa/Getty Images)

The New York Giants officially agreed on a deal yesterday with defensive end Jason Pierre-Paul and signed him for the rest of the season, with incentives placed before him based on how he produces this season if he plays in any regular season games. This marks the end of a grueling process to get Pierre-Paul back on the team after suffering a hand injury in a July 4 fireworks accident, which led to his right index finger being blown off among burns across his hands.

The next step is finding out when exactly the 26-year-old will return to the playing field. Right now, the Giants are looking at Week 10 against the New England Patriots or Week 12 against the Washington Redskins, with a bye week happening during Week 11. Pierre-Paul’s condition did not look promising throughout training camp after the accident and a Sept. 7 physical exam, doubts were looming over the Giants organization when the defensive end would come back. After Monday’s exam, his condition looked more promising and the organization was encouraged to possibly sign him to get him into the roster for the remaining games so he can rehab with team officials and medical staff. This resulted in his signing in Tuesday night and a spot on the Giants roster. “It is just good to have Jason back in our building,” Giants head coach Tom Coughlin said. “You can feel his energy and his desire to overcome what he has had to endure since July. His spirit is undeniable, and he is anxious to get to work with [defensive line coach] Robert Nunn and Spags [defensive coordinator Steve Spagnuolo], as well as our medical and strength and conditioning people.”

The Giants took Pierre-Paul in the first round of the 2010 draft from the University of South Florida and in the 2011 season, he recorded 16.5 sacks that led to the Giants winning Super Bowl XLVI. Three years consisted of injury and not much production but in 2014, he did finish the season with 12.5 sacks which led the Giants to thinking of placing the franchise tag on him. After being labeled franchise player and having to sign a one year $14.813 million deal to play, he blew off his fingers because of a fireworks accident and his future looked bleak for the next couple months. But today, Pierre-Paul is happy to be back on the team and will do anything to help the Giants win.

“I’m just here to help the team out,” Pierre-Paul said. “I’m blessed to play the game, and I’m excited about the opportunity to play again.”

Photo: EAST RUTHERFORD, NJ – OCTOBER 05: Defensive end Jason Pierre-Paul #90 of the New York Giants reacts after a play in the fourth quarter against the Atlanta Falcons during their game at MetLife Stadium on October 5, 2014 in East Rutherford, New Jersey. (Photo by Elsa/Getty Images)