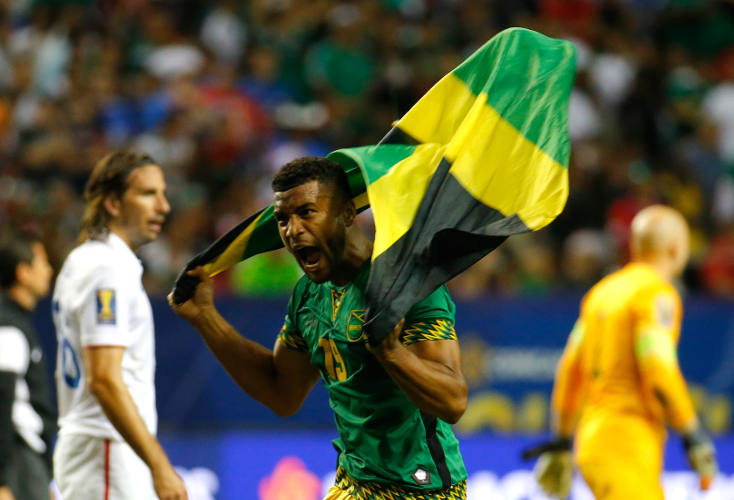 during the 2015 CONCACAF Golf Cup Semifinal match between Jamaica and the United States at Georgia Dome on July 22, 2015 in Atlanta, Georgia.

The United States men’s soccer national team were inching closer and closer to victory at the CONCACAF Gold Cup, walking into Atlanta’s Georgia Dome with high hopes for a FIFA Confederation Berth in 2017. But just like that, Jamaica swooped in and shocked the world, beating the Americans 2-1, sending the US mens team home just one game shy of the finals.

Jamaica just seemed to want it more. Time and time again, the US team played carelessly, as though they had already won.

Darren Mattocks of Jamaica led the charge by scoring off of a long throw by Kemar Lawrence just a bit shy of 30 minutes of play. A mere five minutes later, Giles Barnes scored with a free kick after U.S. keeper Brad Guzan strayed out of the penalty area while Barnes was attempting a throw.

But it’s not as though the Americans did not try. US midfielder, Michael Bradley, attempted to close out the deficit that the Jamaicans created by finding multiple windows of opportunities, one of which, led scoring a goal three minutes into the second half. After the goal however, the chances piled up again and again for the Americans, but the closest thing to a goal would be a thunderous drive ending with a hit to the post. The US team failed to take advantage of the holes in the Jamaican defense, and it led to the first home defeat on American soil to Caribbean opposition in 46 years.

The Jamaican team could not contain their excitement and it must have been chaos on their island.

“My phone hasn’t stopped, as you can imagine,” Jamaica’s Barnes told reporters, embracing the hard fought victory he earned for his country. ”Back in Jamaica, there’s got to be a party going on. Everybody knows how we are.”

Winfried Schaefer, coach of the Jamaican team still knows that while celebration is good, they have not yet won. ”We have one more match to play,” he said. ”Bob Marley is for after the match.”

Check out the highlights here:

But, losing hurts and everyone knows that – especially professional soccer players. The LA Galaxy’s midfield and forward, Landon Donovan, captures the game’s essence in a tweet he posted at game’s end.

Really disappointing result. Give Jamaica credit, they played hard. Feel bad for the guys, know how badly they wanted it.

But in any case, keep your heads up, boys! And good luck, Jamaica!