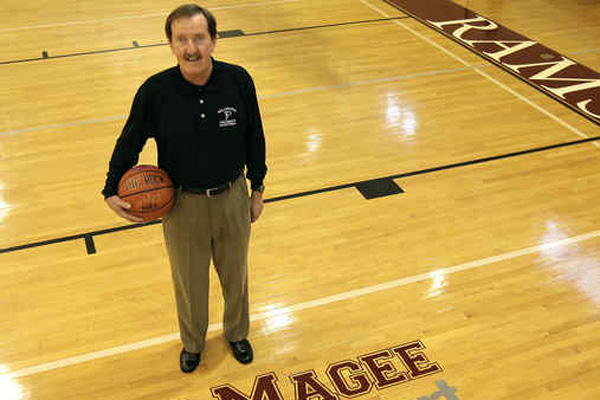 Philadelphia University basketball coach Herb Magee will be celebrating 50 years at the school. He is seen on the court inside the Gallagher Athletic Center. ( David Maialetti / Staff Photographer )

Herb Magee, head coach of the D-2 Philadelphia University men’s basketball team, won his 1,000th game on Saturday in a 80-60 win over Post University (CT). Magee is just the second NCAA men’s coach to reach the mark, which Duke head coach Mike Krzyzewski being the only other after he reached the mark on January 25th against St. John’s. They are joined by former Tennessee women’s head coach Pat Summit as the only three to hit 1,000 at the NCAA level.

Magee reached the mark in front of a sold out crowd at the Gallagher Center, which included some students in body paint, legendary Philadelphia area high school coaches, and even some politicians and sports team executives. “One of the reasons we won that game is because of fan enthusiasm,” Magee told the crowd after the victory. The postgame fare included a speech from Magee and a live interview with ESPN to celebrate the accomplishment.

The story of Magee’s career revolves around Philadelphia University. He set the school’s scoring record as a student-athlete and bypassed a shot at playing for the Boston Celtics to become a coach for the school.  “It’s my school,” Magee has said. “They gave me an opportunity to play here and they created a position for me to be an assistant coach. I have had no desire to ever leave.” In 1967, he was named head coach, a position he has held ever since.

Philadelphia University is currently 15-6 on the season and 9-3 in the Central Atlantic Collegiate Conference. Saturday was Magee’s 2nd attempt to reach the milestone, as Philadelphia lost to Wilmington earlier in the week.