Giants Look Awful In Their Division Loss To Eagles - uSports.org 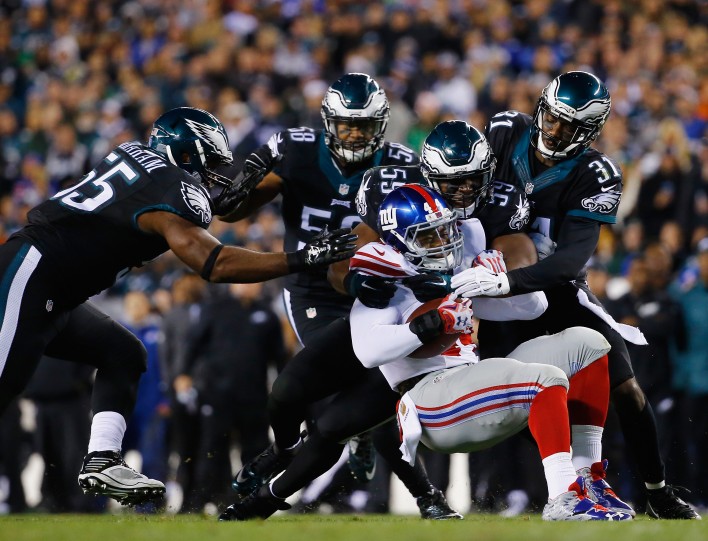 PHILADELPHIA, PA - OCTOBER 19: Andre Williams #44 of the New York Giants is tackled by the Philadelphia Eagles during their game at Lincoln Financial Field on October 19, 2015 in Philadelphia, Pennsylvania. (Photo by Al Bello/Getty Images)

Giants Look Awful In Their Division Loss To Eagles

With the NFC East division in a crucial place with all teams neck-and-neck with each other, two rivals in the New York Giants and Philadelphia Eagles faced off at Lincoln Financial Field in Philadelphia for Monday Night Football to high expectations. With the Giants having first place in the division and the Eagles creeping right behind, both teams had something to fight for in this division battle.

The Giants had a great first drive in running up the field for an 80-yard drive capped off by wide receiver Odell Beckham Jr. catching a touchdown from quarterback Eli Manning. After this drive, it was all downhill for the Giants with tight end Larry Donnell getting stripped by Eagles linebacker DeMeco Ryans for an interception and on the next series, a pivotal roughing-the-passer penalty committed by Giants defensive end Damontre Moore would lead to an Eagles touchdown by quarterback Sam Bradford throwing to wide receiver Riley Cooper. A blatant pass from Manning saw Eagles cornerback Nolan Carroll run it back for a pick-six interception. Nothing would come out of the Giants for the rest of the game and the team lost in embarrassing fashion with a 27-7 defeat.

“It’s a bad game, it’s a bad production,” a frustrated Giants head coach Tom Coughlin said. “We’ve got to be able to handle the big games. The games where things don’t go our way, we’ve got to handle them better. You’ve got handle those situations better.”

With this loss, the Giants are now tied with the Eagles for the NFC East with another division game coming up next week when the Dallas Cowboys come to the Meadowlands for a 4:25 p.m. kickoff. The Giants already lost their first game with the Cowboys in the first game of the season and in order to win on Sunday, they cannot have a repeat presentation of how they looked on Monday night if they are to be in contention for the rest of the season.

Photo: PHILADELPHIA, PA – OCTOBER 19: Andre Williams #44 of the New York Giants is tackled by the Philadelphia Eagles during their game at Lincoln Financial Field on October 19, 2015 in Philadelphia, Pennsylvania. (Photo by Al Bello/Getty Images)