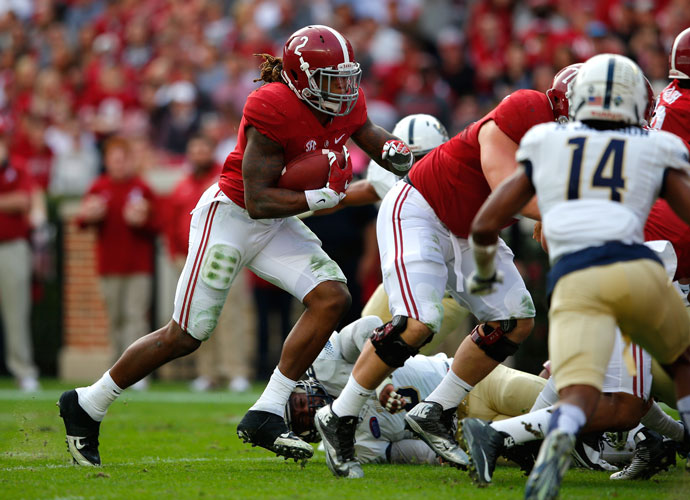 TUSCALOOSA, AL - NOVEMBER 21: Derrick Henry #2 of the Alabama Crimson Tide rushes for a touchdown against the Charleston Southern Buccaneers at Bryant-Denny Stadium on November 21, 2015 in Tuscaloosa, Alabama. (Photo by Kevin C. Cox/Getty Images)

With the college football season winding down, some of sports’ most prestigious awards are on the horizon. One of those is the Maxwell, given to the player who a panel of sportswriters, coaches, and sportscasters judge to be the best player in NCAA football. This year’s finalists are Alabama running back Derrick Henry, Stanford running back Christian McCaffrey and Clemson quarterback Deshaun Watson.

During the 2015 season, Henry has been dominant for the Crimson Tide rushing for over 1,500 yards and 21 touchdowns. McCaffrey’s individual statistics are less impressive–he has 1,546 rushing yards but only seven touchdowns–but he is a more versatile player; just this weekend, for example, he set a school record with 389 all-purpose yards. Lastly, Watson stands out by virtue of being the only quarterback among the three finalists. While leading the Tigers to an undefeated 11-0 record, he has thrown for nearly 3,000 yards and 26 touchdowns.

With games still to play, however, there is still room for movement. If one player puts up a dominant performance in this weekend’s games, that could be enough to swing the vote in his favor.

The Maxwell Award, along with eight others, will be handed out on December 10.

Photo: Derrick Henry #2 of the Alabama Crimson Tide rushes for a touchdown against the Charleston Southern Buccaneers at Bryant-Denny Stadium on November 21, 2015 in Tuscaloosa, Alabama. (Photo by Kevin C. Cox/Getty Images)