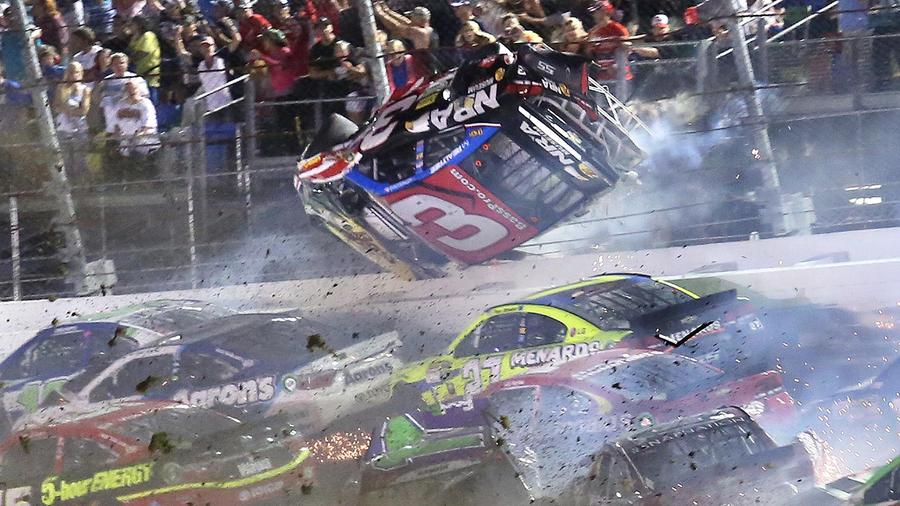 NASCAR’s Coke Zero 400 at Daytona was delayed several hours due to rain. But that didn’t stop the fireworks, as the restrictor plate racing produced a wild race. The sport’s biggest star, Dale Earnhardt, Jr., came away with his 4th Daytona victory by winning the race shortly after 2:30 am EST. The talk of the racing world came shortly after the cars crossed the start-finish line, however, as “the big one” broke out and sent Austin Dillon’s #3 car into the catchfence in a violent wreck.

As the cars entered the tri-oval for the final time, Denny Hamlin got turned around by Kevin Harvick at the start-finish line. From there, the big wreck broke out. Austin Dillon was one of the cars caught up in the crash, as his car got send up into the catchfence and landed on its roof. The pit crew of Dale Earnhardt, Jr.’s team rushed from their pit box to check on Dillon, but gave the crowd a thumbs up to indicate he was okay. Dillon then escaped from the car under his own power, a testament to the safety features of the new car.

The catchfence did it’s job in keeping Dillon’s car out of the stands, but was destroyed in the process. Dillon suffered a bruised tailbone and bruised forearm, but escaped major injury and should be ready to go for Kentucky on Saturday. 12 fans were also injured by the crash, but all were treated and released for minor injuries.

Earnhardt, Jr.’s win was his second of the season, both coming at restrictor plate tracks. It’s his first win at Daytona since winning the 2014 Daytona 500. Teammate Jimmie Johnson finished 2nd, while Hamlin and Harvick finished 3rd and 4th. Kurt Busch rounded out the top 5. Jeff Gordon, in his final race at Daytona, ended 6th. Dillon had finished the race in 7th before his violent accident.

The NASCAR Sprint Cup season is now nine races away from the Chase playoff. Although the new rules package at Kentucky should throw a curveball at teams, Dale Jr.’s win shuts out many drivers of a potential victory given Daytona’s unpredictable nature. It’s now up to the drivers without a win to try and get themselves into victory lane on a standard race track. Saturday night at Kentucky Speedway will be their next shot to do so.