Cooperstown Welcomes the Baseball Hall of Fame Class of 2015 - uSports.org 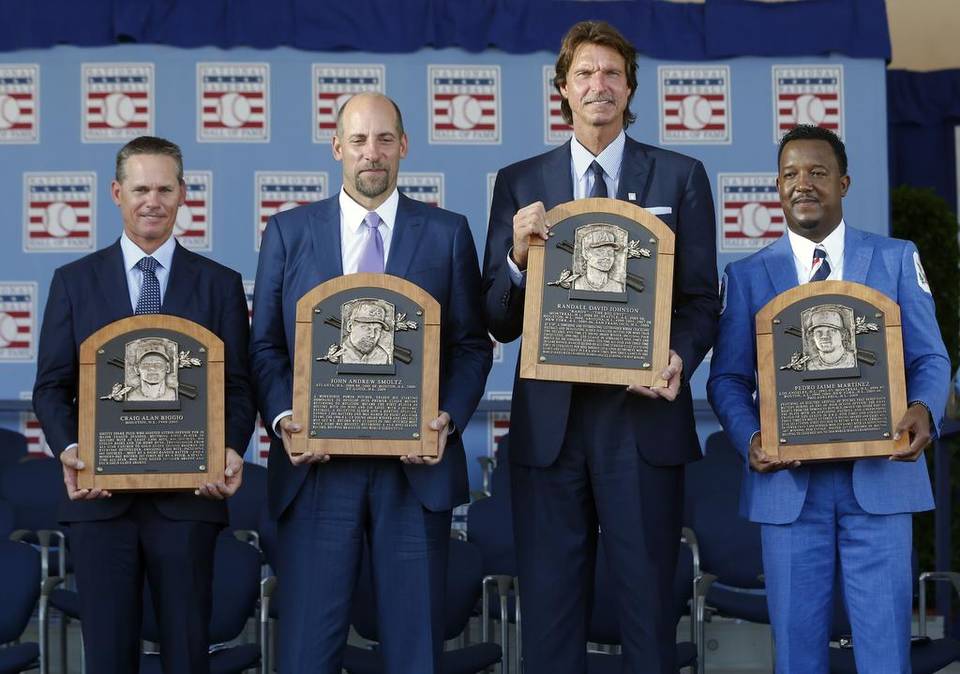 Cooperstown Welcomes the Baseball Hall of Fame Class of 2015

The Baseball Hall of Fame held its 2015 induction ceremony on Sunday, welcoming four former players who were fan favorites and legendary performers whose careers will live forever in the halls of Cooperstown. Craig Biggio, Randy Johnson, Pedro Martinez, and John Smoltz were enshrined in the Baseball Hall of Fame as the 2015 class in front of an estimated crowd of over 40,000 in what was an entertaining ceremony showcasing each of their personalities.

The ceremony was showcased by the three pitchers, who had a combined 735 wins, 11,113 stikeouts, and 9 Cy Young Awards. Johnson, Martinez, and Smoltz also pitched during the peak of the steroid era and when pitchers’ stats were dwindled by the large power numbers being rung up by hitters. All three played for different clubs, but Martinez will go into the hall as with a Boston Red Sox cap, Smoltz with the Atlanta Braves, and Johnson with the Arizona Diamondbacks, who he won the 2001 World Series with. Biggio went in as a Houston Astro, where he spent all 20 seasons of his career between four positions and hit a .281 average with 3,060 hits.

All four players thank those that got them to Cooperstown through the years– from family members to coaches and teammates. The inductees also had some fun on the stage. Johnson brought his camera to take pictures, as the Hall of Famer is an avid photographer in his retirement. Smoltz, on the other hand, brought out a wig. And of course Martinez, one of the most colorful players in the league in his playing days, made some jokes throughout his speech.

After recent years being clouded with thin inductee classes due to the steroid era, this Baseball Hall of Fame class is one the fans will love, as seen by the return of huge crowds for Hall of Fame weekend this year in Upstate New York. It’ll also go down as one of the most powerful pitching classes ever seen, made all the more impressive of when the three pitched in the majors. From here on out, the four that were inducted are forever in the Baseball Hall of Fame, immortalized with the greats that came before them and those that will join them in the future within the hallowed grounds of baseball history.