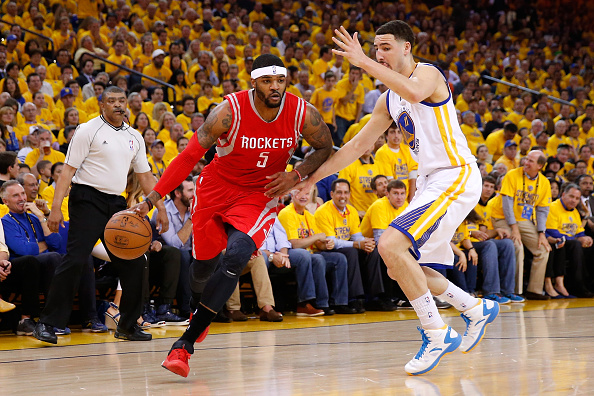 OAKLAND, CA - MAY 27: Josh Smith #5 of the Houston Rockets drives on Klay Thompson #11 of the Golden State Warriors in the first half during game five of the Western Conference Finals of the 2015 NBA Playoffs at ORACLE Arena on May 27, 2015 in Oakland, California. NOTE TO USER: User expressly acknowledges and agrees that, by downloading and or using this photograph, user is consenting to the terms and conditions of Getty Images License Agreement. (Photo by Ezra Shaw/Getty Images)

The Clippers are slowly inching their way to finals caliber play, reportedly by adding more depth to an already stacked frontcourt.

The Clippers have agreed to a one year $1.5 million contract for former Houston Rocket and veteran small forward, Josh Smith, according to ESPN,

During his time with the Rockets, Smith became instantly instrumental in the game plan behind All Star James Harden and childhood friend and All Star Dwight Howard.  Smith scored in double digits in 35 games where he came off the bench with four games with 20+ points in the regular season. But his true impact was felt in the Western Conference semifinals. Down 3-1 in the series against the Clippers, Smith was placed in the starting lineup for Game 5, and Houston eventually rallied to win the series. Also, during Game 6 in L.A., Smith and Corey Brewer combined to score 29 fourth-quarter points, rallying from a 19-point deficit for the win.

In a statement Thursday, Smith thanked the Rockets for the support he received while playing for them.

He said that, “Over my pro career, I have spent a lot of time in Houston with friends and family. Over the past year, while with the Rockets, the team, fans and people of Houston have made it a second home. I want to express my appreciation to everyone for the support and kindness they have showed me and my family while I have been here. Thank you!”

With Paul Pierce, Lance Stephenson, Wesley Johnson and Jordan Hamilton naturally playing small forward and Blake Griffin at power forward, it is unclear where Smith will fit in the Clippers system. However, at the prospect of the losing Jamal Crawford, we may end up seeing a big lineup trading floor spacing and perimeter defense for increased rebounding and paint denial.