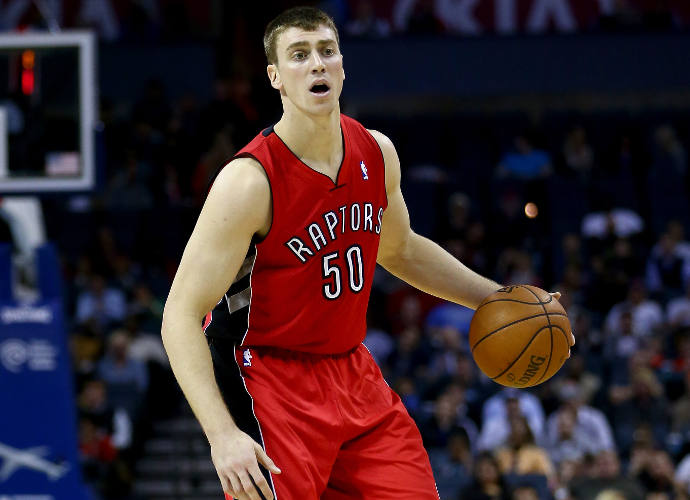 during their game at Time Warner Cable Arena on November 6, 2013 in Charlotte, North Carolina. NOTE TO USER: User expressly acknowledges and agrees that, by downloading and or using this photograph, User is consenting to the terms and conditions of the Getty Images License Agreement.

The Charlotte Hornets seem to be implementing a rotation overhaul after recently acquiring power forward Tyler Hansbrough from the Toronto Raptors.

Hansbrough is the sixth new pickup for the Hornets this offseason, who were not able to qualify for the NBA playoffs last year. The six-foot-nine, 250-pound power forward played college basketball at North Carolina until getting drafted by the Houston Rockets. He was then part of a multi-player trade that brought him to the Indiana Pacers and eventually, Toronto.  During his college term, he was one of the all-time most productive players at North Carolina, alma mater of NBA legend, Michael Jordan. Hansbrough arrival in Charlottle comes only a month after the depature of long-time guard, Gerald Henderson, who in college played against Hansbrough and gave him a bloody nose during the ’07 UNC-Duke game.

Hansbrough best played professionally during the 2010-11 season where he started for a career high 29 games and averaged 11 points and 5.2 rebounds. However, decreased minutes behind Patrick Peterson and Lewis Scola resulted in a lowered production with a measly average of 3.6 points and 3.6 rebounds last year.

Hansbrough will be taking the place of former Hornet, Bismack Biyombo, whom the team opted not to re-sign this off-season.

In addition to Hansbrough, the Hornets have supplemented their lineup with Nicolas Batum from the Trail Blazers, Spencer Hawes from the Clippers, and Jeremy Lamb from the Thunder. They also signed free agent Jeremy Lin and drafted the 6’11” shooting center, Frank Kaminsky, out of Wisconsin with the ninth overall pick.