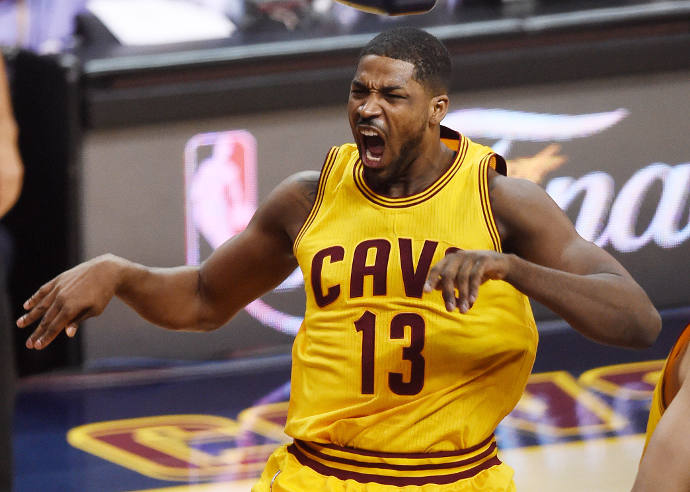 during Game Three of the 2015 NBA Finals at Quicken Loans Arena on June 9, 2015 in Cleveland, Ohio. NOTE TO USER: User expressly acknowledges and agrees that, by downloading and or using this photograph, user is consenting to the terms and conditions of Getty Images License Agreement.

After a dynamite showing of hustle in the NBA finals against the Golden State Warriors, the now restricted free agent, Tristan Thompson, has said that he will leave Cleveland Cavaliers next season if he doesn’t get a long term contract. If he does not get the contact, he has a one year qualifying option to go to a different team for $6.8 million.

The 6’9’’ center is looking for a five year contract worth $94 million, but according to ESPN’s Brian Windhorst, the Cavs will not be able to meet that price point as they are worried about the nature of paying a large luxury-tax bill. It is possible for him to get the money he desires by taking the option, waiting a year, and then re-signing him, but a statement from his agent, Rich Paul, does not look like Thompson is considering this route.

“We are a long way from it, but it’s clear, yes,” Paul said. “If [Thompson] plays on the [qualifying offer], it will be his last year with the Cavs.”

However, there has been no answer from the Cavs to remove or redesign the offer they are offering their big man.

Last season, he brought a big bag of heart and hustle to the floor when he replaced Kevin Love after being a rotational sixth man. He averaged 8.5 points, 8 rebounds during the regular season, but during the post season and in the finals, he had 9.6 points, 10.8 rebounds (4.4 of which were offensive), and 1.2 blocks. He was a leader on the glass, but unfortunately was unable to help Lebron win a ring under the weight of the Spash Brothers and company.

However, if Thompson wants to remain a Cav and have another shot at a title, then he should sign the qualifying offer, get matched by the Cavs, and then just keep doing his thing. But for $94 million, and his statistical production, it does not look like he is going to get the offer that he wants.