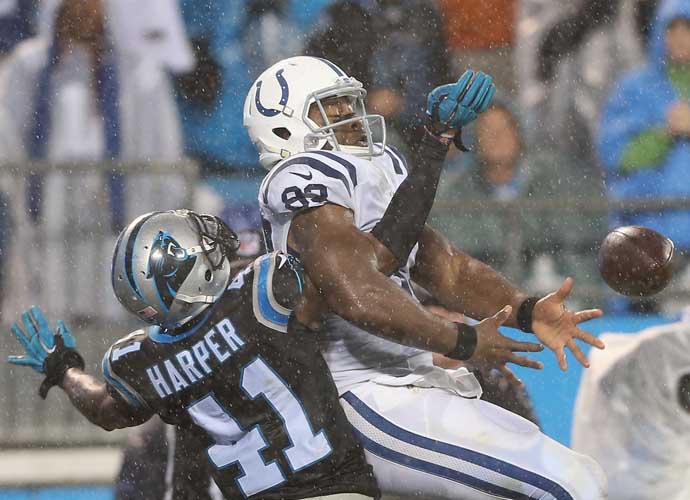 Roman Harper #41 of the Carolina Panthers breaks up a pass to Dwayne Allen #83 of the Indianapolis Colts during their game at Bank of America Stadium on November 2, 2015 in Charlotte, North Carolina. (Photo by Streeter Lecka/Getty Images)

The Carolina Panthers defeated the Indianapolis Colts 29-26 in overtime on Monday night at their very own Bank of America Stadium in Charlotte, N.C., after blowing a 17-point lead in the fourth quarter to tie 23-23. Colts QB Andrew Luck was able to execute a 16-play, 54-yard drive to tie the game with a field goal at the end of regulation. Kicker Adam Vinatieri nailed a 50-yard field goal at the start of OT.

Panthers QB Cam Newton then led the team to the 23-yard line, from which Graham Gano successfully completed a field goal to tie the game at 26. After an interception by Panthers LB Luke Kuechly, the Panthers only needed to advance five yards to put Gano in position to secure them the game with a 52-yard field goal.

The most outstanding event of the game, however, was a swarm of protesters who rappelled from the upper deck of the stadium to reveal a banner displaying Bank of America’s funding of a North Carolina energy company.

The Colts struggled to gain positive yardage from the very start: they fumbled their second snap of the game, and three plays into Indianapolis’ next possession, Luck threw an interception.

Both teams accumulated a total of seven turnovers (three for the Panthers and four for the Colts), most likely due to the heavy rain that fell in Charlotte, although it diminished in the second half. As a result, there were no drives longer than 38 yards in the first half, and seven drives were shorter than 10 yards. The Colts now have 19 turnovers thus far this season, the second most in the league only behind the Detroit Lions.

PHOTO: Roman Harper #41 of the Carolina Panthers breaks up a pass to Dwayne Allen #83 of the Indianapolis Colts during their game at Bank of America Stadium on November 2, 2015 in Charlotte, North Carolina.  (Photo by Streeter Lecka/Getty Images)