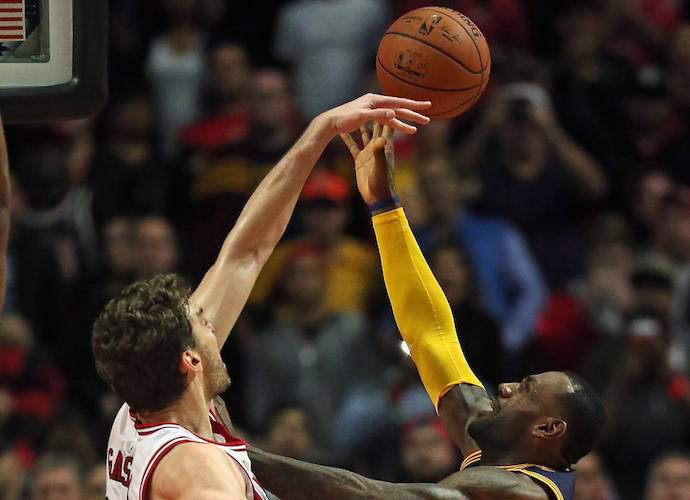 CHICAGO, IL - OCTOBER 27: Pau Gasol #16 of the Chicago Bulls blocks a shot by LeBron James #23 of the Cleveland Cavaliers in the final 10 seconds during the season opening game at the United Center on October 27, 2015 in Chicago, Illinois. The Bulls defeated the Cavaliers 97-95. Note to User: User expressly acknowledges and agrees that, by downloading and or using the photograph, User is consenting to the terms and conditions of the Getty Images License Agreement. (Photo by Jonathan Daniel/Getty Images)

The NBA season opened last night with the Cleveland Cavaliers and the Chicago Bulls facing off at the United Center in Chicago, with a very special guest in attendance to witness the game. President Barack Obama was seated courtside for the game with both players and fans in awe of his presence and his desire to witness his hometown team.

The game itself was due to be a competitive one and it sure was leading up to its expectations in the fourth quarter, and the way the game ended had fans on the edge of their seats. With ten seconds to go, Bulls center Pau Gasol posted up defensively to Cavs star LeBron James and ended up blocking his lay-up attempt leaving 3.6 seconds on the clock. On the next play, an inbounds play intended for James saw Bulls forward Jimmy Butler blocking the pass, thus sealing the Bulls their first victory for the season. “That is how we are going to win every game,” Bulls point guard Derrick Rose said. “It kind of feels good going into every game knowing you have the possibility of winning. You have a chance of winning every game because we are so good and deep.”

The Bulls had been in the works of a new fast-paced offense with new head coach Fred Hoiberg at the helm, but defense played a huge factor in stopping the Cavs. Rose, playing with a mask to protect his fractured left orbital, finished with 18 points while power forward Nikola Mirotić had 19 points and Butler finishing with 17 points of his own. James had a double-double for the night with 25 points and ten rebounds while power forward Kevin Love, who played his first game in six months because of a separated shoulder, had 18 points.

President Obama was very thrilled that his beloved team won while he was in attendance and sees a bright future for the Bulls. “I think it’s very promising,” Obama told TNT. “You’ve got a new coach, he’s opening up the offense a little bit. The question is going to be can they hang on to the defense, with the new offense?”

Both teams will be on the road for their next games tonight with the Cavs visiting the Memphis Grizzlies and the Bulls visiting the Brooklyn Nets.

Photo: CHICAGO, IL – OCTOBER 27: Pau Gasol #16 of the Chicago Bulls blocks a shot by LeBron James #23 of the Cleveland Cavaliers in the final 10 seconds during the season opening game at the United Center on October 27, 2015 in Chicago, Illinois. The Bulls defeated the Cavaliers 97-95.  (Photo by Jonathan Daniel/Getty Images)