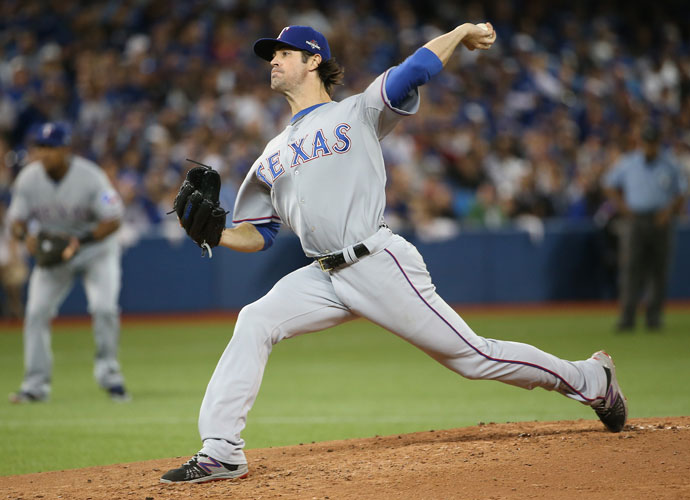 TORONTO, CANADA - OCTOBER 14: Cole Hamels #35 of the Texas Rangers delivers a pitch in the fifth inning against the Toronto Blue Jays during game five of the American League Division Series at Rogers Centre on October 14, 2015 in Toronto, Ontario, Canada. (Photo by Tom Szczerbowski/Getty Images)

In an elimination game where the stakes were high for both teams and saw the craziest inning ever unfold in baseball history, the Toronto Blue Jays are advancing to the ALCS for the first time since 1993. The fans at the Rogers Centre have not been that loud since the famous Joe Carter walk-off home run that had the Blue Jays win the World Series.

How the win came about started in the top of the seventh inning when an unfortunate routine throw from Blue Jays catcher Russell Martin to pitcher Aaron Sanchez hit Rangers batter Shin-Soo Choo’s bat by mistake and causing it to roll. Rangers baserunner Rougned Odor came running home seeing the ball was loose and plate umpire Dale Scott waved his hands as to call the play dead. After careful deliberation from umpires, they ruled Odor safe at home and causing the entire Blue Jays fan base to erupt in chaos and even belting trash onto the field.

During the bottom of the seventh inning, the Rangers exposed themselves in the worst fielding of baseball in recent years with shortstop Elvis Andrus causing three consecutive fielding errors, something that will haunt him forever. Because of this, two men were on the corner bases with Blue Jays slugger Jose Bautista coming to the plate. Bautista ends up belting a three-run home run including an epic bat flip, giving the Blue Jays a 6-3 lead. This caused both dugouts to clear protesting the bat flip with another bench clearing protest later because of Blue Jays shortstop Troy Tulowitzki and Rangers reliever Sam Dyson exchanging words.

With the drama and dust settled after a wild NLDS Game 5, the Blue Jays will be facing off against the Kansas City Royals tomorrow night for the ALCS and a ticket to the World Series. The last time these two teams faced off in the ALCS was 1985, with the Royals winning the World Series that year.

Photo: TORONTO, CANADA – OCTOBER 14: Cole Hamels #35 of the Texas Rangers delivers a pitch in the fifth inning against the Toronto Blue Jays during game five of the American League Division Series at Rogers Centre on October 14, 2015 in Toronto, Ontario, Canada. (Photo by Tom Szczerbowski/Getty Images)