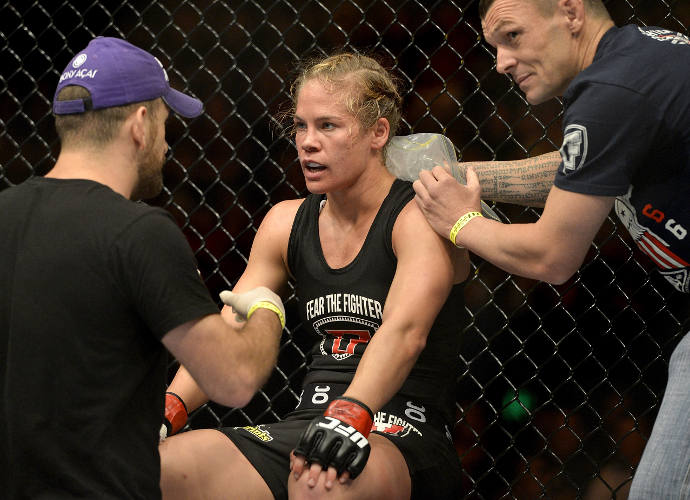 during the UFC Brisbane XXXXX bout between XXXXX of XXXX and XXXX of XXXX at Brisbane Entertainment Centre on December 7, 2013 in Brisbane, Australia.

By now, people know of Ronda Rousey and her 14-second victory over Cat Zingano, but her current opponent in UFC190, Bethe Correia may be someone we have to watch out for.

While the underdog, Correia is not short of spirit. During Thursday’s stare down, the first time since their bout was announced, it was Correia, not Rousey, who initiated the fiery smack talk. The Brazilian ran up to stage, and after getting in Rousey’s face, began to intimidate her opponent. While Correia does not speak English, the effect of her bravado was still a very respectable act which may have gotten into Rousey’s head as they prepare for battle on Saturday night.

Rousey, in her fighting fashion, said simply, “You’re not meant for this life.”

They will stare down each other again on Friday during the UFC 190 weigh-ins featuring a special 90-minute show airing live on FOX Sports 1.

Now, at 9-0, the 5’5’’ Correia has a reach of 64’’ inches, but unlike Rousy, who has never needed to grind out a fight past the first round, she has had most of her fights completed to the end. While some may say that this is an indicator of weakness – an illustration of her inability to finish fights on the ground or standing up – it may be one of her strengths, as in her fight against Shayna Braszler, late in the second round, her punches were connecting upwards of 85% ending in a referee stoppage TKO. In order to beat Rousey, she will need to be able to effectively land punches at a high percentage early (a la Sara McMann) and try to stay off the ground, as her opponent has a vicious clinch and ground game.

However, a weakness that her camp should stress before Saturday is her defense after kicks, as in her fight against Jessamyn Duke, she got a bloodied nose and welts after receiving counters off of lead leg kicks. Also, Rousey had trouble against the boxing prowess of McMann, but Correia doesn’t keep continual pressure standing and lags, Rousey will be able to quickly take over.