Barcelona's Messi Head Butts AS Roma Defender, Lucky It Was A Friendly - uSports.org 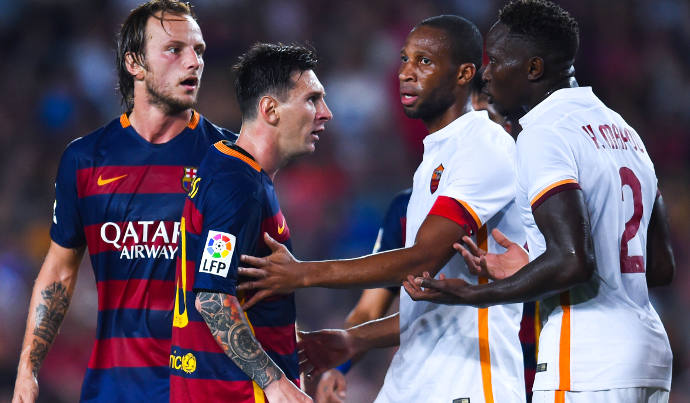 Barcelona’s Messi Head Butts AS Roma Defender, Lucky It Was A Friendly

FC Barcelona may have inserted a ringer during their exhibition game against the Italian AS Roma, and he looks, plays, and moves like superstar Lionel Messi, but with a lot more attitude.

During Wednesday’s friendly after a referee whistled off a play, Messi turned into Arsenal’s Martin Taylor, old school Vinnie Jones, and Elizabeth Lambert against Roma’s defender, Mapou Yanga-Mbiwa. After head butting the Italian defender, he instigates even further, putting his hand across Yanga-Mbiwa’s throat before being broken up by teammates and referees. It is very unbecoming of Barcelona’s star, as the game was nowhere near finished – the incident occurred in the 35th minute – and it was not even a competitive game. But, when you’re Messi, every game is competitive, and it shows.

To be fair, however, Yanga-Mbiwa put his head into Messi’s before the first headbutt, so in some ways his actions are justified. Regardless, neither player received a red card or ban, an outcome which would have occurred if this was a regular competition. Even then, it is hard to see a player of Messi’s level get banned for any amount of time.

This is all part of the game though, says Barcelona vice president, Jordi Mestre.

“It is what happens in football games,” he said. “I think it is anecdotal and there is no reason for giving this chapter more importance. It happens and it will keep happening in the future. It is normal when you play football.”

Yanga-Mbiwa plays center back for France as well as Roma.