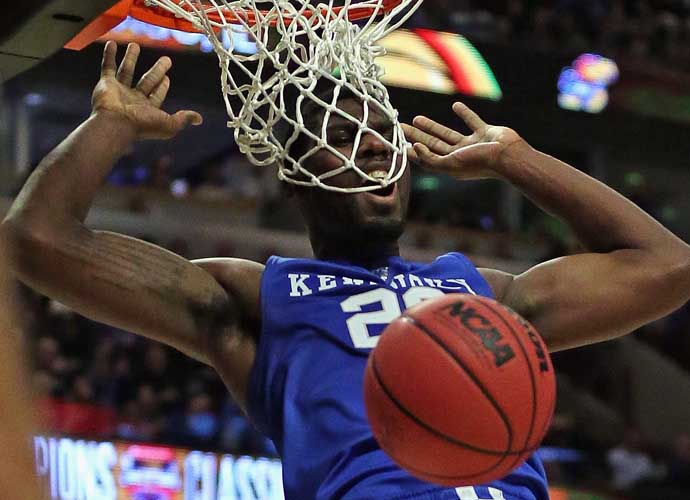 The all-day college hoops marathon on ESPN saved some of its best games for last, as national title contenders squared off.

The Kentucky Wildcats and Duke Blue Devils were just one of those games, with the #2 Wildcats beating the #5 Blue Devils 74-63.

Much was made of Duke guard Grayson Allen, who had scored 16 points in the National Championship win last year over Wisconsin. But he finished with only six points, while Kentucky’s mixture of skilled freshman and experienced upperclassmen paved the way.

Senior Alex Poythress for Kentucky will remember this game for something other than his nine points and seven rebounds, though. Going up for a dunk off of a nice pass by Jamal Murray, Poythress briefly got his teeth caught in the net. While he recoiled after coming down, Poythress didn’t seem too inconvenienced by the play.

Duke center Marshall Plumlee accounted for most of the Blue Devils’ early points, scoring nine of their first 11 points. Plumlee finished with 12 points, also contributing 10 rebounds and six blocks to the loss. Senior Amile Jefferson and junior Matt Jones were the only other Blue Devils in double figures, both scoring 16. Duke plays VCU next for the 2K Classic at Madison Square Garden this Friday.

Kentucky has to be encouraged by their play. Beating the #5 team in the country is impressive, especially for coach John Calipari. Four of Kentucky’s starters contributed double-digit scoring to the win, including freshman guard Murray and sophomore guard Tyler Ulis. Kentucky hosts Wright State this Friday.