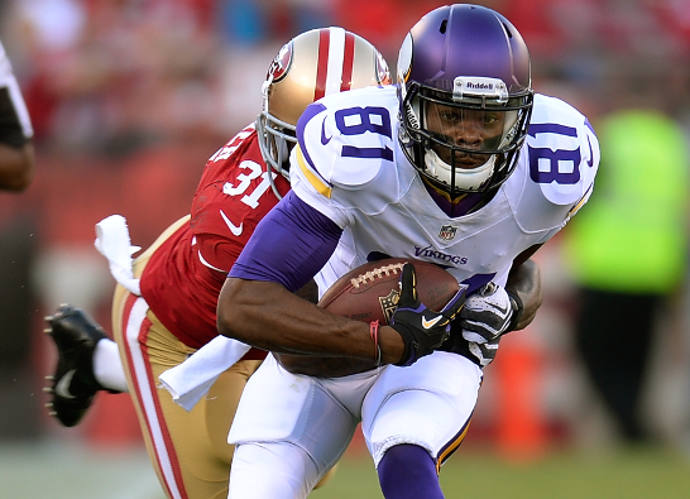 Jerome Simpson #81 of the Minnesota Vikings gets tackled by Donte Whitner #31 of the San Francisco 49ers after a seventeen yard pass play in the second quarter at Candlestick Park on August 25, 2013 in San Francisco, California. (Photo by Thearon W. Henderson/Getty Images)

If injury plagues or practice brawls weren’t already on the rise, substance abuse suspensions weren’t falling behind either as the NFL has suspended Jerome Simpson without pay for six games.

And while team management already knew of an impending suspension, they made it clear from the onset that good behavior is the only thing that will keep him in good standing – a few touchdown receptions also wouldn’t hurt him either.

49ers coach, Jim Tomsula seems to have faith that their free agent pickup will remain on a good track.  “Look, there’s consequences to everything you do. Jerome was out of football for a year,” he said. “We know there were things in the past year, what he’s doing now, he’s doing everything we’re asking him to do. He’s on a good plan. He also understands there’s no margin for error. I do believe in Jerome. And I think this is going to be a success story.”

The suspension, which was announced on Tuesday, comes from an ongoing legal case from last year.

If all goes well, he will be placed back onto the active roster on Oct. 19, but as of now he is only allowed to play in preseason practices and games.

However, with his shaky past and possible bright playing career ahead of him, Simpson is thankful to be back on the field, and he intends to stay there. “It’s been a blessing to get back to playing football. I was off for a year,” he said. “I’m just blessed to be with this organization of people that stand behind me, really believe in Jerome Simpson. I’m just really committed to proving the people that are behind me right. That I can turn it around and be a success story, and just prove people wrong, and use my natural abilities to go out here and catch the football.”

After being arrested in 2013 on the suspicion of drunken driving, and then again in 2014, Simpson was able to avoid going to jail after pleading guilty to careless driving and instead received a misdemeanor charge of driving while impaired.

Simpson at the time of the 2013 arrest was on probation for a drug conviction.

But now, the 2008 second-round pick by the Bengals is trying to earn a clean slate, and he is thankful the 49ers took the chance on him.

“The coaches here, ownership, they believed in me,” he said.