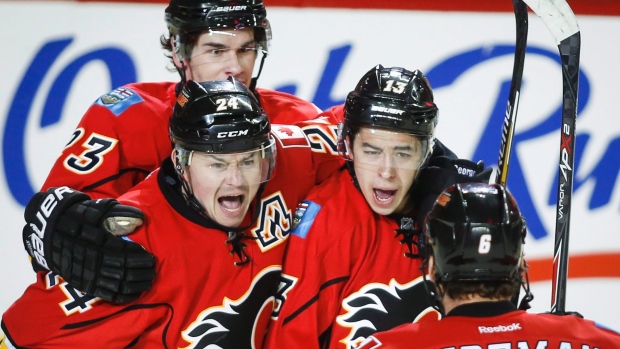 In a weekend full of pivotal Game 6’s in the NHL Stanley Cup Playoffs, four teams were able to win their series and move on to the 2nd round. The Chicago Blackhawks, Calgary Flames, Minnesota Wild, and Montreal Canadiens all finished off their series with Game 6 wins. In the other Game 6 of the weekend, the New York Islanders staved off elimination and the closing of the Nassau Coliseum with a win against the Washington Capitals to force a Game 7. The only Game 5 of the weekend saw the Detroit Red Wings take one more step towards an upset by beating the Tampa Bay Lightning, giving them the chance to win the series on home ice.

The weekend kicked off in what could be the final game at Nassau Coliseum with the home team Islanders pulling off the 3-1 victory to force Game 7 against the Capitals. John Tavares’ goal and assist led the way for the Isles in the victory. Jaroslav Halak’s 38 saves were also critical, as the Capitals were unable to tie the game in the 3rd period even though they possessed the puck for most of the way. The series will head down to Washington for the series deciding game Monday. With the Islanders looking to delay their move to Brooklyn for another round and Alexander Ovechkin and the Capitals looking to turn around their playoff reputations, there’s a lot at stake in this Game 7.

But while the Islanders forced a Game 7, the other sixth games became the series clinchers around the NHL. On Saturday night, the Chicago Blackhawks once again mounted a comeback against the Nashville Predators and won the game 4-3 and the series 4-2. Duncan Keith’s goal with under four minutes to go in the 3rd period would prove to be the series-clincher. Chicago was down 3-1 in the first period, but a move to return to goalie Corey Crawford after Scott Darling’s bad start proved to be the right one for head coach Joel Quenneville. Awaiting Chicago will be the Minnesota Wild, who knocked out the St. Louis Blues with a 4-1 victory on Sunday. Zach Parise had 2 goals in the win, including the opening shorthanded goal to give the Wild momentum throughout the game. It will be the second year in a row where the Blackhawks and Wild will meet in the 2nd round. Last year’s series was decided in six games, with Chicago winning four games to two.

Both all-Canadian series wrapped up over the weekend as well. On Saturday, the Calgary Flames came back twice and defeated the Vancouver Canucks 7-4 to move on to the 2nd round. After going down 3-0, Calgary was able to tie up the game within 20 minutes of play. And after they started the 3rd period down 4-3, the Flames exploded for four goals in the final frame to get the series-deciding victory. Jiri Hudler had an explosive night, grabbing four points on two goals and two assists. Calgary will face the Anaheim Ducks in their next series. Meanwhile out east, the Montreal Canadiens survived a wild comeback attempt by the Ottawa Senators to win 1-0 and eliminate Ottawa from the playoffs. Carey Price may have gotten the help from a controversial early whistle by officials when it seemed the Senators had tied up the game, but his 43 saves on the night once again showed people why he’s the favorite for the Hart Trophy, given to the NHL’s most valuable player.

Montreal’s opponent has yet to be determined, as the Detroit Red Wings and Tampa Bay Lightning are only five games into their series. In their Game 5, the Red Wings shook off their Game 4 collapse to take a critical 3-2 series lead back to Joe Louis Arena in a commanding 4-0 win on Saturday. Petr Mrazek earned the first shutout of the NHL Stanley Cup Playoffs.

Monday night will have both of the series remaining in the first round in elimination games. The Lightning look to fight for another game as they head to Detroit to take on the Red Wings in Game 6. That game will be played at 7 pm EST. Meanwhile at 7:30, the Capitals host the Islanders in a winner-take-all Game 7 at Verizon Center. The winner will face the top-seeded New York Rangers later on in the week.