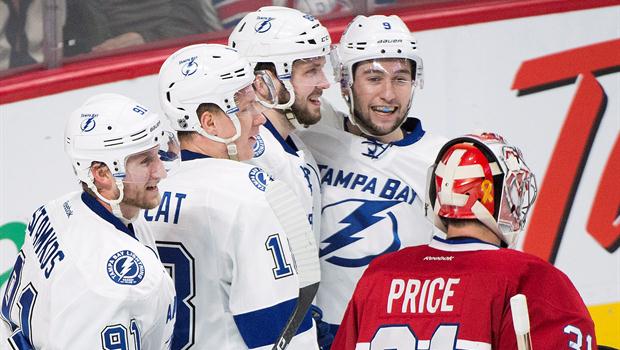 The second round of the NHL Stanley Cup Playoffs continued over the weekend with the Capitals and Rangers becoming locked up in a 1-1 series tie while the Blackhawks, Ducks, and Wild all dominated their Game 2’s on Sunday to take commanding 2-0 series leads.

Saturday’s only game was a matinee at Madison Square Garden, as the top-seed New York Rangers made up for their Game 1 heartbreaker by taking down the Washington Capitals 3-2. Chris Kreider, Dan Boyle, and Derick Brassard each scored a goal for New York in the win while Henrik Lundqvist sealed the deal in net with his 32 saves. Alex Ovechkin added a goal for the Capitals and continued his hot start to the series. The series is tied at 1 as the two teams head to Washington for the next two games.

Sunday had a trio of games and all three of them would be blowouts. None were more pronounced than the Tampa Bay Lightning’s 6-2 drubbing of the Montreal Canadiens. Tampa Bay carried the momentum from their Game 1 double overtime win to make easy work of the Canadiens and leave Montreal with a 2-0 series lead. After a slow start to the playoffs on special teams, the Lightning exploded for four power play goals. Steven Stamkos also had an awakening, scoring his first goal of the playoffs and adding two assists in the process.

The Minnesota Wild continue to be winless in the playoffs at United Center, as the Chicago Blackhawks took Game 2 4-1 to take a 2-0 series lead. After a scoreless first 32 minutes to the game, Chicago took control of the game in the late 2nd period with a pair of goals. Patrick Kane was the star of the show with two goals, while Corey Crawford was back to being solid in net with just one goal allowed on 32 shots. With the loss, Minnesota is now 0-8 in Chicago in the playoffs, with all those losses coming in the past 3 seasons.

The night capped off with another dominating win for the Anaheim Ducks, as they shut out the Calgary Flames 3-0 to take a 2-0 series lead on home ice. Frederik Andersen had 30 saves in the shutout victory, offsetting a solid night for Flames’ netminder Karri Ramo and his 33 saves. Anaheim is currently outscoring Calgary 9-1 in the series, meaning the Flames will have to come up with some answers if they would like to get the series back in southern California.

Just one game is on tap for Monday in the NHL Stanley Cup Playoffs, as the New York Rangers play the Washington Capitals in Game 3. Puck drop is scheduled for 7:30 pm EST.

Read more about:
Hockey NHL Stanley Cup Playoffs
Listen to the uInterview Podcast!
Get the most-revealing celebrity conversations with the uInterview podcast!